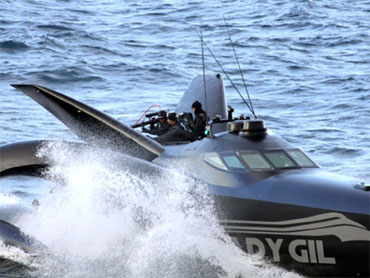 A conservation group's boat had its bow sheared off and was taking on water Wednesday after it collided with a Japanese whaling ship in the frigid waters of Antarctica, the group said. The boat's six crew members were safely rescued.

The clash was the most serious in the past several years, during which the Sea Shepherd Conservation Society has sent vessels into far-southern waters to try to harass the Japanese fleet into ceasing its annual whale hunt.

The society said its vessel Ady Gil - a high-tech speedboat that resembles a stealth bomber - was hit by the Japanese ship the Shonan Maru near Commonwealth Bay and had about 10 feet of its bow knocked off.

Locky Maclean, the first mate of the society's lead ship, said one crewman from New Zealand appeared to have suffered two cracked ribs but the others were uninjured. The crew was safely transferred to the group's third vessel, though the Ady Gil's captain remained on board to see what could be salvaged, he said.

"The original prognostic was that it was sinking, but at this point it is flooded with water but it seems to still have a bit of buoyancy," Maclean told The Associated Press by satellite phone from the ship, the Steve Irwin.

The group accused the Japanese ship of deliberately ramming the Ady Gil.

"They were stopped dead in the water when the incident occurred," Maclean said of the Ady Gil. "When they realized that the Shonan Maru was aiming right for them, they tried to go into reverse to get the bow out of the way but it was too late. The Shonan Maru made a course correction and plowed directly into the front end of the boat."

Japan's Fisheries Agency, which has no direct involvement in whaling but oversees all the country's fishing operations, said it was still checking details about the clash.

"We have confirmed that there was a collision, but we have no other details. We have not heard that any boats have sunk," said Fisheries Agency spokesman Toshinori Uoya.

Uoya said there were no injuries on the Japanese side.

Sea Shepherd sends boats to Antarctic waters each southern summer to try to stop the Japanese whaling fleet from killing whales under what it calls a scientific whaling program. Conservationists and many countries say the program is a front for commercial whaling.

Each side routinely accuses the other of dangerous activity during what has become a cat-and-mouse chase in one of the world's most remote regions.

Australia and New Zealand - which both have Antarctica territories and are among the closest nations to the waters where the hunt goes on - have urged both sides to show restraint, warning that they are far away from rescue of anything goes wrong.

"Our strongest condemnation applies to any violent or dangerous activity that takes place in these remote and inhospitable waters," Australian Environment Minister Peter Garrett said Wednesday. He said he could confirm the collision, but that details were still unclear.

The Institute of Cetacean Research, the non-profit organization that conducts the hunt, said the Ady Gil came "within collision distance" of the Nisshin Maru's bow and repeatedly dangled a rope in the water that could have entangled the ship's rudder and propeller.

The Ady Gil's crew lobbed small projectiles designed to release a foul smell, and the whalers responded by firing high-powered hoses to keep the Sea Shepherd vessels away, the institute said in a statement.

"The obstructionist activities of the Sea Shepherd threaten the lives and property of those involved in our research, are very dangerous and cannot be forgiven," it said.

Japan's whaling fleet left in November for its annual hunt in Antarctic waters. Uoya said that for security reasons, details of the fleet's composition, the number of whales it hopes to take and the number of crew members are not being released to the public.

The Ady Gil is a 78-foot trimaran made of carbon fiber and Kevlar in a design meant to pierce waves. It was built to challenge the record for the quickest circumnavigation of the globe and can travel faster than 46 mph.

Sea Shepherd unveiled the Ady Gil last October saying a California millionaire with the same name had donated most of the money for it. At the time, the group said the boat would be used to intercept and physically block Japanese harpoon vessels.