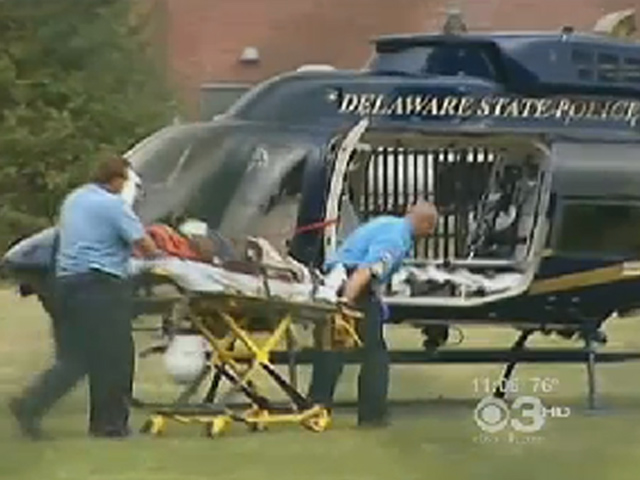 (CBS/AP) DOVER, Del. - A shoot-out at a Delaware soccer tournament Sunday that left three dead and two wounded may have been triggered by armed men targeting the tournament organizer, authorities say.

The three dead include 47-year-old tournament organizer Herman Curry, 16-year-old Alexander Kamara, who was participating in the tournament, and 43-year-old Sheldon Olge, one of three suspects in the shooting at a park near downtown Wilmington.

According to witnesses, one of the gunmen tapped Curry on the shoulder, and he was fatally shot in the chest when he turned around, police said. Police said one or more people in the crowd returned fire at the gunmen.

"It does not appear to be a random shooting," said Capt. Nancy Dietz, head of the Wilmington police department's criminal investigation division. She refused to confirm reports suggesting that Curry was targeted because he was witness to a 2008 shooting allegedly involving one of Sunday's suspected shooters.

Olge, one of the suspected shooters, suffered multiple gunshot wounds and was pronounced dead at Christiana Hospital.

"He and the other two suspects came to the game, fired multiple rounds and then got in their car and fled the scene," Dietz said.

Authorities said the vehicle crashed a short distance away. Olge was found inside the vehicle. Otis Phillips, 35, of New Castle and Jeffrey Phillips, 22, of Wilmington fled on foot but were found hiding in a vacant lot. Police said the two men are not related.

Police said Otis Phillips was wanted on an outstanding warrant charging him with first-degree murder in the 2008 shooting of Chris Palmer, 40.

Otis Phillips and Jeffrey Phillips, who was shot in the leg, are both charged with two counts of first-degree murder in the deaths of Curry and Kamara. They are also charged with the attempted murder of a 33-year-old Baltimore man who suffered a minor gunshot wound to the shoulder in Sunday's shooting.

Dietz refused to say whether any of the suspects had a criminal history, but court records indicate that Olge had previous drug-related convictions in Delaware.