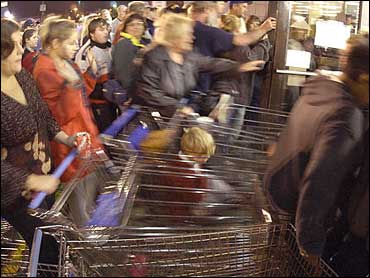 While Thanksgiving day involves eating turkey and watching football, many people are also taking the time to make shopping lists in preparation for one of the year's biggest shopping days.

Retailers are also busy preparing. Some malls are serving coffee and donuts, others will have dancing Santas lead early-morning shoppers in aerobics.

One of my favorite plans to lure shoppers is sponsored by Target; you can sign up for a Friday morning (recorded) wake-up call from model Heidi Klumn, rapper Ice-T and others.

All of this goes to show how important Black Friday is for retailers. Their urgency is well-founded: almost 25 percent of their yearly sales happen in November and December.

The good news for retailers is that despite rising interest rates, gas and heating prices, shoppers are gearing up to spend a little more than they did last year.

Total holiday spending is estimated to reach $219.9 billion. Most surveys show the average American will spend between $700 and $800 this season, although some surveys pin that number at over a $1,000.

Here is the typical holiday budget breakdown, as found by the National Retail Federation.