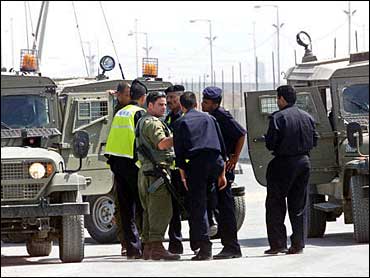 After tentative steps toward peace, Israeli troops killed a Palestinian militiaman during a West Bank raid Thursday, and the two sides bickered over who won the past 33 months of fighting.

In the Gaza Strip, Israeli forces temporarily closed an important junction after rockets were fired at a Jewish settlement, casting a shadow over a handover of territory to Palestinians.

Early Thursday, Israeli troops killed a local leader of the Al Aqsa Martyrs' Brigades, a militia linked to Yasser Arafat's Fatah movement, when an arrest turned violent in the West Bank city of Qalqiliya, the army said. The man killed was identified as Mahmoud Shawer, an assistant to Ibrahim Mansour, the Brigades' leader in Qalqiliya, who was arrested.

The army said both men were armed and that one was killed when he tried to flee. Palestinian sources said Shawer was only wounded in the leg during the escape attempt, but when troops withdrew, he was found dead with gunshot wounds to the head.

The developments came despite important peace moves — including the withdrawal Wednesday of Israeli forces from the West Bank town of Bethlehem —which had raised hopes for an end to 33 months of bloodshed.

Even though each side is accusing the other of failing to keep its part of the deal, the latest violence is not expected to derail the peace road map, reports CBS News Correspondent Robert Berger. Both sides say they're committed to moving forward. The Palestinians have vowed to arrest anyone violating the cease-fire, and Israel plans to release some Palestinian prisoners.

Israel said it had closed the key Gaza junction in response to the firing of four anti-tank shells at the nearby Jewish settlement of Kfar Darom. Four people were wounded by shrapnel, it said.

Israel filed a formal complaint with the Palestinian Authority about the incident, saying the shelling was a violation of a security agreement on the pull out, the army said.

Early Thursday, Israeli troops killed a militant from the Al Aqsa Martyrs' Brigades, a militia linked to Yasser Arafat's Fatah section, when an arrest turned violent in the West Bank city of Qalqiliya, the army said.

The man killed was identified as Mahmoud Shawer, an assistant to Ibrahim Mansour, the Brigades' leader in Qalqiliya, who was arrested.

The army said both men were armed and that Shawer was killed when he tried to flee arrest. Palestinian sources said Shawer was only wounded in the leg during the escape attempt, but when troops withdrew, he was found dead with gunshot wounds to the head.

Palestinians called it a violation of the cease-fire declared by militant groups. But Israel says it will only hold its fire in Bethlehem and Gaza, from where troops have pulled out, reports Berger. In other places, Israel says terrorists planning attacks are fair game.

In the Gaza Strip, Israeli forces blocked off a main junction, just days after it was opened as part of a security handover Monday in a northern part of the strip, the first of two pullbacks this week under the "road map" peace plan launched by President Bush at a June 4 Mideast summit.

Two Palestinians were injured when Israeli troops fired on a car trying to pass jeeps blocking the road, Palestinian witnesses said. They were taken to hospital in the nearby town of Khan Younis.

The army said troops had fired in the air on two occasions when Palestinian vehicles had approached the road block, endangering the soldiers. It was not aware of any victims.

While initially the army said the road would remain blocked for just three hours, Israeli troops later put up a concrete barrier at the site and made no move to leave.

"This reflects what liars the Israelis are," said Ismail Kadoura, a taxi driver sitting in a long traffic jam at the barrier. "The occupation is still here, and we are still here."

Palestinian Information Minister Nabil Amr called for international intervention, saying, "The Israeli government is not serious about calming down the situation on the ground; they are not serious about reaching any political settlement."

Israel, in turn, said the Palestinian Authority was failing to meet its obligations under the road map, a blueprint for Mideast peace and Palestinian statehood by 2005.

"The road map requires first and foremost that the Palestinians dismantle the infrastructure of terrorism, which they have failed to implement," Israeli government spokesman Dore Gold said. "Until they do, Israel has every right to take defensive measures on behalf of its citizens."

The Palestinian Authority fears a crackdown could trigger a civil war. They instead helped persuade the three main Palestinian groups to declare a temporary halt in attacks against Israelis on Sunday.

The truce announcement was followed by the Israeli withdrawals in Bethlehem and part of northern Gaza, and an upbeat summit between the two sides premiers, who rededicated themselves to the road map.

Mr. Bush called Israeli Prime Minister Ariel Sharon on Wednesday and invited him to visit Washington in September, according to a statement from Sharon's office.

Army Radio reported that Israel released nine Palestinian prisoners on Wednesday, but noted that their sentences were up. Twelve more were to be released Thursday, the report said.