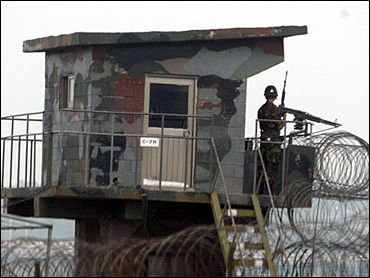 The South Korean military said it did not suffer casualties in the shooting between two guard posts a half a mile apart in the heavily mined Demilitarized Zone, or DMZ, the buffer created at the end of the 1950-53 Korean War to keep opposing armies apart.

There was no comment from North Korea on the exchange.

South Korean military officials said the North Koreans shot first. The South was investigating whether the shooting was inadvertent or a scheme to rattle nerves, possibly to gain leverage in the dispute over the North's suspected development of nuclear weapons.

"We need to clarify whether it's intentional or accidental before we can say anything about its impact on the nuclear issue," said Lee Jihyun, a spokeswoman for South Korean President Roh Moo-hyun.

A team from the U.S.-led United Nations Command, which oversees the southern half of the DMZ, inspected the site of the shooting near the South Korean town of Yonchon, 35 miles north of Seoul. The Pentagon said it was aware of the incident, but had no comment.

The South Koreans then issued a loudspeaker broadcast, telling the North Koreans that they were in "clear violation" of the armistice that ended the Korean War.

The shootout occurred on the 55th anniversary of the enactment of South Korea's 1948 Constitution. Advancing U.S. and Soviet forces divided the Korean Peninsula after the capitulation of Japanese colonial forces at the end of World War II.

Decades ago, shooting incidents were commonplace along the DMZ, but they have tapered off in recent years. The last exchange of fire in the DMZ was in November 2001, causing no casualties. A naval battle between ships from the two Koreas in June 2002 killed six South Koreans and an unknown number from the North.

Tensions on the Korean peninsula have been rising since October, when Pyongyang admitted having a clandestine program to enrich uranium for nuclear weapons. The admission led to the collapse of the 1994 agreement in which North Korea had agreed to freeze its nuclear weapons program in exchange for fuel aid and the construction of two nuclear power generating stations.

White House and Pentagon officials said North Korea's announcement that it is moving toward producing new nuclear weapons was a problem, but not a crisis. The White House says that while he has not ruled out a military response, Mr. Bush plans to continue pressing for a diplomatic solution to the impasse.

But former Defense Secretary William Perry said this week in an interview with The Washington Post: "I have thought for some months that if the North Koreans moved toward processing, then we are on a path toward war."

"I think we are losing control. The nuclear program now underway in North Korea poses an imminent danger of nuclear weapons being detonated in American cities," Perry told the newspaper.

Yonhap, a South Korean news agency, said North Korea was open to a China-proposed format for talks on the nuclear issue, and negotiations could occur as early as next month if the United States agrees.

China said Thursday that it will send an envoy to the United States to press for a new round of talks. Citing an unnamed South Korean government official, Yonhap said the visit would occur Friday or Saturday.

Yonhap said a possible talks format would begin with meetings of U.S., Chinese and North Korean officials in Beijing, followed by meetings that would also include Japan and South Korea.

Powell said in Washington on Wednesday that, "the diplomatic track is alive and well and I expect to see some developments along that track in the very near future." The United States "is still hopeful of a diplomatic solution," he said.