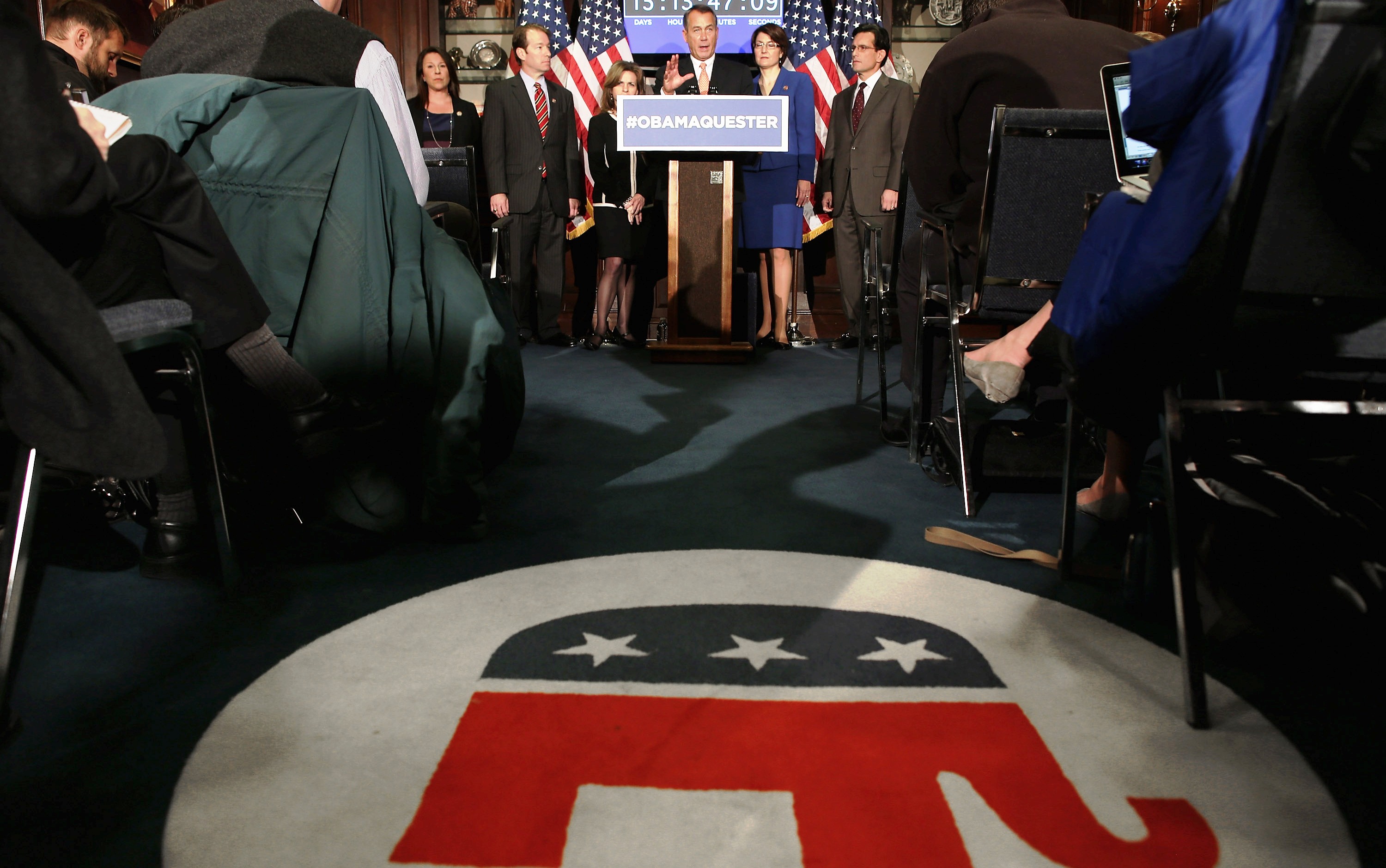 So what separated the Republican yeas from the nays in

As you might expect, those who voted against re-opening the government represent districts more stridently and safely conservative, where they might have to worry about primary challenges from the right, but not a General election. Republicans who voted "yes" tended to come from more closely-competitive and potential "swing" districts.

We looked at the types of districts for members who voted "yes" on the Senate's bill to fund the government and raise the debt ceiling, compared to the districts whose members voted against the bill.

Republicans who voted "no" came from districts that where GOP candidates typically win with a comfortable 59 percent margin, on average. These 144 members would likely be more worried about a Tea Party or conservative primary challenge (or they're Tea Party themselves) than they are about being re-elected next year.

Only 16 of the 144 "no" votes came from representatives to districts that look even potentially competitive for 2014 -- and only five of those look like they will probably be in play.

Geographically, they're more heavily southern (where much of the GOP caucus is to begin with). Fifty-four percent of the "no" votes came from southern Republican districts, another quarter from the Midwest. They're also heavily rural; on average 28 percent, compared to "yes" Republican members' districts.

President Obama took, on average, just 39 percent of the votes from these districts last year.

"Yes" Republicans tended to come from swing, or potential swing districts. When Republicans win these districts it's by a much-closer, 54 percent margin, on average.

Voters in these marginal districts are more evenly balanced; and candidates have to worry about winning some moderates and independents to claim election victories. Thirty of the 87 that fit this description are already on our watch list as competitive or potentially competitive swing districts next year.

The "yes" votes were also spread more evenly around the country. About one-quarter in each of the North/Atlantic, South, Midwest and West regions. They're more suburban districts, on average; only 15 percent rural.

President Obama did a bit better in these districts, on average, with 44 percent in the last election.

For much of the showdown standoff, House Speaker John Boehner held his caucus together and did not bring a "clean" CR bill to the floor. Speakers typically won't do so when the bill doesn't have the support of the majority of their caucus. It was unclear that it did have the votes then, but Wednesday night, as the deadline approached, it did find 87 -- still not a majority of the Republican caucus, but plenty to pass.

On the Senate side, there was a heavy Tea Party presence among the "no" votes and likely fear of primary challenges; notably, Mike Enzi, who faces a challenge from Liz Cheney. A yes vote by Enzi undoubtedly would have given the Cheney campaign a lot of ammunition. Pat Roberts of Kansas has a primary challenge from Milton Wolf.

Others may be looking down the road and vying for the GOP nomination in 2016. Making conservatives and Tea Party voters happy will be key, and Marco Rubio, Rand Paul and, of course, Ted Cruz, all might fall into this category, though none of them has said so officially.

Alicia Budich contributed to this report