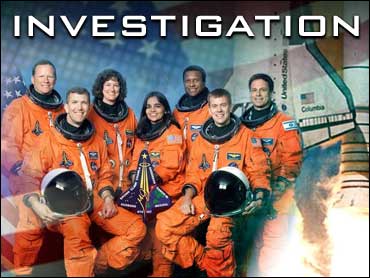 A videotape salvaged from the wreckage of space shuttle Columbia provides what is likely the final glimpse of the astronauts before the shuttle broke apart. They are seen putting on their gloves and casually chatting — unaware of the impending destruction.

NASA said the video holds nothing of investigative value, but it will allow the public to observe the astronauts and the inside of the shuttle moments before Columbia experienced the first sign of trouble. NASA plans to release copies to the media sometime this week.

Thirteen minutes of tape were preserved, despite burning that destroyed the rest of it, an official close to the accident investigation said Tuesday night. The tape showed four crew members doing routine tasks in the cockpit as the shuttle zoomed over the Pacific Ocean on Feb. 1.

The tape ends four minutes after the start of Columbia's atmospheric entry while the spaceship is still above the Pacific and flying normally. The first indication of trouble shows up in temperature monitors in the left landing gear compartment another four minutes after the end of the tape, the official said.

Commander Rick Husband, his co-pilot William McCool, flight engineer Kalpana Chawla and Laurel Clark were on the flight deck and reportedly caught on camera. The three other astronauts were on the lower deck. Neither the official nor a NASA spokeswoman knew where, when or how the tape was found, but it was thought to have been recovered in Texas sometime during the past week.

Members of the board investigating the disaster knew about the videotape for the past several days but did not discuss it at the weekly news conference Tuesday afternoon, the official said, because they wanted to give NASA time to show it to the astronauts' families.

In an interview broadcast by CNN late Tuesday, Husband's widow, Evelyn, who is deeply religious, said her strength has failed her at times. "But, I mean, the thing that has not failed," she said, "I have not felt hopelessness and I haven't felt that once and I'm being very honest about that and I'm very thankful for that. There have been times through this that I don't think I can take it anymore. The pain is horrible."

All seven astronauts died as the shuttle broke apart during re-entry on Feb. 1. The investigative board suspects a breach in the left wing allowed superheated gases to penetrate Columbia.

Earlier Tuesday, the accident investigators said they want to know more about a mysterious object that almost certainly fell off the shuttle and was flying alongside the spacecraft during its second day in orbit.

The object orbiting near Columbia was never noticed during the flight. After the shuttle's destruction over Texas, just 16 minutes short of its planned Florida landing, the Air Force Space Command began analyzing radar data and noticed the object.

Initially, NASA said it suspected the object might be frozen waste water dumped overboard or an orbiting piece of space junk that the shuttle happened to encounter.

But Air Force Brig. Gen. Duane Deal, a board member, discounted both possibilities Tuesday and said the object almost had to have come from the shuttle itself.

He described the object as about 1 foot by 1.3 feet in size and said it was flying in tandem with Columbia one day into the mission. It was within 50 feet of the shuttle and, within that first day, started separating farther and farther away until it burned up on re-entry three days later, he said.

"It was something that more than likely came loose," Deal said.

The composition of the object is unknown, but it was lightweight and not dense, Deal said. Lab testing is planned by the Air Force and NASA to determine the material, based on its reflectivity.

Columbia had just gone through a major maneuver in orbit Jan. 17, about 24 hours into its flight, when the object popped out of nowhere, Deal said. That suggests it could have broken loose from the shuttle during the maneuver.

Following the accident, Space Command staff went through reams of data to track the object until its atmospheric re-entry Jan. 20. Nearly 3,200 radar observations were made of Columbia during its 16 days in orbit.

"It's been the most laborious examination that's ever taken place in the history of Space Command, looking at every single one of those observations," Deal said.

Because the astronauts did not do a spacewalk and did not have many windows, they would not have noticed the unidentified object, Deal said.

Meanwhile, a piece of a thermal tile, believed to be from the top of the left wing near the fuselage, remains the westernmost piece of debris found yet — and probably the earliest known fragment from its breakup. The fragment was found in West Texas, about 300 miles west of Fort Worth.

The board's chairman, retired Navy Adm. Harold Gehman Jr., said he does not know how badly damaged the fragment is and stressed that it is too early to draw any conclusions from it. But he held up pictures of another tile fragment found about 30 miles west of Fort Worth. It was dark gray or almost black with orange specks and extremely rough surfaces — heat damage that is much more severe than what is normally seen from shuttle tiles.