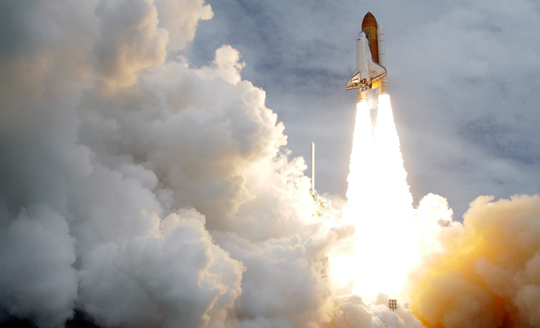 CAPE CANAVERAL, Fla. — Atlantis astronauts are spending most of their first full day in orbit checking the space shuttle's delicate heat shield for any damage from Friday's launch.

They're using the shuttle's robot arm and an extension to slowly examine the most vulnerable parts of the shuttle's outer edges. In 2003, damage sustained during liftoff destroyed space shuttle Columbia when it returned to Earth.

Atlantis' crew will dock with the International Space Station on Sunday, deliver a year's worth of critical supplies to the orbiting outpost, and bring trash home.

The shuttle is scheduled to land back on Earth on July 20 after 12 days in orbit, though the flight is likely to be extended to a 13th day.

The flight of Atlantis is the final space shuttle mission, as NASA ends the 30-year program to pursue a new path in space exploration. It closes out three decades of both triumph and tragedy for NASA, and ushers in a period of uncertainty for America's space program.

Atlantis, says CBS News correspondent Mark Strassmnann, "left in a cloud of sentimentality -- and speculation: what's next for NASA."

"It's such a familiar sight," relfect CBS News space analyst Bill Harwood. "I've been doing this for more than 25 years. And the realization that we're never going to see that again - the majesty of that vehicle, that winged orbiter, is gone. It's going to be years before we see American astronauts launch on American spacecraft from the Kennedy Space Center or any other launch site. That's kind of a gut-wrenching realization - if you're a believer in space exploration and think that's a good thing for the country to do. It's gonna be a long hiatus, and we're gonna have to rely on the Russians in the near-term to get U.S. astronauts to and from space."

After some last-minute suspense over the weather and a piece of launch-pad equipment, Atlantis and its four astronauts blasted off practically on schedule at 11:29 a.m., pierced a shroud of clouds and settled flawlessly into orbit in front of a crowd estimated at close to 1 million, the size of the throng that watched Apollo 11 shoot the moon in 1969.

It was the 135th shuttle flight since the inaugural mission in 1981.

After Atlantis' return, it will be lights out for the shuttle program. Thousands of workers will be laid off within days. The spaceship will become a museum piece like the two other surviving shuttles, Discovery and Endeavour. And NASA will leave the business of building and flying rockets to private companies while it turns its attention to sending humans to an asteroid by about 2025 and Mars a decade after that.

It will be at least three years — possibly five or more — before astronauts are launched again from U.S. soil.

Leinbach said that as Atlantis disappeared in the clouds, he and a friend in the control center put their arms around each other and said: "We'll never see that again."

Inside the room, "It seemed like we didn't want to leave," Leinbach said. "It was like the end of a party, and you just don't want to go, you just want to hang around a little bit longer and relish our friends and what we've accomplished. So it was very special, lots of pats on the back today."

The space shuttle was conceived even as the moon landings were under way, deemed essential for building a permanent space station. NASA brashly promised 50 flights a year — in other words, routine trips into space — and affordable service.

Shuttle crews built the International Space Station, repaired several satellites in orbit and, in a feat that captured the public's imagination, fixed the Hubble Space Telescope's blurry vision, enabling it to see deeper into the cosmos than ever before.

But the program suffered two tragic accidents that killed 14 astronauts and destroyed two shuttles, Challenger in 1986 and Columbia in 2003. NASA never managed more than nine flights in a single year. And the total tab was $196 billion, or $1.45 billion a flight.

This day of reckoning has been coming since 2004, a year after the Columbia tragedy, when President George W. Bush announced the retirement of the shuttle and put NASA on a course back to the moon. President Barack Obama canceled the moon project in favor of trips to an asteroid and Mars.

But NASA has yet to work out the details of how it intends to get there, and has not even settled on a spacecraft design. The lull that the end of the shuttle program will bring is unsettling to many space-watchers.

The space shuttle demonstrates America's leadership in space, and "for us to abandon that in favor of nothing is a mistake of strategic proportions," lamented former NASA Administrator Michael Griffin, who led the agency from 2005 to 2008.

After days of gloomy forecasts full of rain, lightning and heavy cloud cover, Atlantis lifted off just 2½ minutes late but was visible for only 42 seconds before vanishing into the clouds.

In the final minutes of the countdown, NASA bent its own rules regarding rain in the vicinity to allow the launch to go forward. In the end, the liftoff was delayed not by the weather but by the need to verify that a piece of launch pad equipment was retracted all the way.

Spectators jammed Cape Canaveral and surrounding towns for the emotional farewell. Kennedy Space Center itself was packed with shuttle workers, astronauts and 45,000 invited guests. Among the notables on the guest list: a dozen members of Congress, Cabinet members, the chairman of the Joint Chiefs of Staff, four Kennedy family members, singers Jimmy Buffett and Gloria Estefan, and two former NASA chiefs.

"I'm a little bit sad about it and a little bit wistful," said Jennifer Cardwell, 38, who came with her husband, John, and two young sons from Fairhope, Ala. "I've grown up with it."

From now on, private rocket companies will take over the job of hauling supplies and astronauts to the space station. Until those flights are up and running a few years from now, American astronauts will be hitching rides to and from the space station via Russian Soyuz capsules.

With Atlantis settled in orbit, NASA expressed gratitude to its employees by giving some of them mission flags and held a big barbecue in the cavernous but empty Vehicle Assembly Building at the Kennedy Space Center.

Joan Kranz — whose father is legendary Apollo 13 flight director Gene Kranz, now a critic of NASA's current direction — was laid off last year from United Space Alliance, NASA's prime shuttle contractor, after 25 years of working for the program in Houston. She cried during Friday's launch, which she watched from the visitors center next door to Houston's Johnson Space Center, home to Mission Control.

"Every time the commentator said `final' that pretty much did me in," she said.