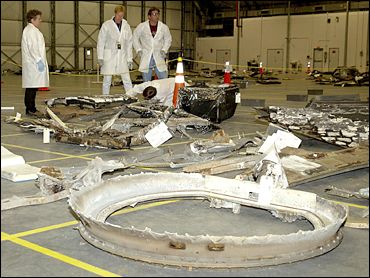 The board investigating the Columbia disaster has too many members who are on the government payroll, lacks scientists and doesn't have enough distance from NASA, say several members of the panel that investigated the Challenger explosion.

"It would put their independence beyond a doubt if they were to report to the president," said David C. Acheson, a member of the Challenger board.

Acheson, 81, a retired attorney living in Washington, was one of the 13 members of the Rogers Commission, named after its chairman, the late William P. Rogers, the former Secretary of State.

The Rogers Commission was made up of engineers, an astronomer, a lawyer, a space journalist, Nobel Prize-winning physicist Richard Feynman, former astronauts Neil Armstrong and Sally Ride and legendary test pilot Chuck Yeager. Its unsparing 1986 report on the Challenger accident pushed NASA to make significant safety and management changes to the space shuttle program.

Some U.S. lawmakers have criticized the Columbia panel, mostly military brass and government officials with no household name recognition who were appointed by NASA administrator Sean O'Keefe a day after the shuttle was destroyed on Feb. 1.

"It would be sound policy to have the investigation totally independent of government," said Robert W. Rummel, 87, a retired aerospace engineer in Mesa, Ariz., and former Rogers Commission member.

Challenger panel members said they have no doubts about the integrity and the ability of the Gehman board. But they recall NASA's uncooperative approach in the early days of the Challenger investigation and said board members had to push hard for information.

"There was a lot of obfuscation," said Challenger board member Robert Hotz, 88, former editor of Aviation Week & Space Technology.

Then-board member Albert Wheelon, 74, a retired physicist, noted that unlike the Rogers Commission, most of Gehman's board members are government employees.

"If pressure is exerted, can the pressure be resisted and can the root problem, if it is management, be corrected?" Wheelon asked. "Some people from NASA wanted to write the report for us. It's what institutions and individuals do to protect themselves. It's human nature.

"The most important thing, is that they have an independent spirit and the courage of their convictions."

Few could argue about the independence of Feynman, who famously rebutted NASA efforts to play down the possibility that cold weather impaired the resiliency of O-ring seals on Challenger's booster rockets. Gaps in the seals allowed burning fuel to erode through the rings to cause the fatal blast.

During a recess at the commission's hearings in February 1986, Feynman compressed a piece of rubber-like O-ring material with a simple clamp, dropped it into a glass of ice water, pulled it out and released the clamp, demonstrating that the material lacked resiliency for a few seconds.

"I think one of the big differences is we had several serious scientists on the board," said Eugene Covert, 77, an engineering professor at MIT and Rogers Commission member. "I don't think there are any serious scientists right now."

Covert praised the recent addition to the Gehman board of former Air Force Secretary Sheila E. Widnall, who teaches at MIT.

But investigators aren't yet ruling it out. Digital photographs of the material are being analyzed at NASA's Johnson Space Center in Houston. Meanwhile, a NASA investigator confirms that debris found Saturday in Utah did not come from the shuttle.