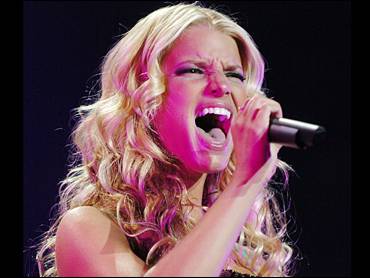 Jessica Simpson says she's this close to slipping into a pair of Daisy Dukes.

The singer and reality TV star told The Associated Press she's in the lead to star as Daisy Duke in a movie version of "The Dukes of Hazzard," which is scheduled to come out sometime next year.

Catherine Bach played the sexy Duke cousin, known for wearing denim micro-shorts, in the TV series that ran from 1979-85. Britney Spears had been among the stars reportedly vying for the movie role, but Simpson, who's starting a summer tour next month, says she's the first choice.

"That's looking very, very good and that will happen after my tour. As of right now, I'm (in) the No. 1 slot for Daisy, so hopefully nothing changes," she said Wednesday.

If Simpson does get the part, it could be a consolation. This month, ABC passed on her comedy pilot, in which she played a not-too-bright starlet named Jessica Sampson who joins a television news program.

The 23-year-old — whose fame has skyrocketed with the success of the MTV reality series "Newlyweds: Nick & Jessica" — said ABC wanted to recast the show, something she wasn't willing to do.

"I connected with my cast, and I loved how it turned out, and I think that it could have been successful the way it was," she said.

In the end, she says it worked out for the best, because with her upcoming tour and movie plans, she didn't have time for a series. And she'll still do variety specials with her husband, Nick Lachey; the couple's variety special in April pulled in strong ratings for ABC.

"Everything works out for a reason and I'm glad there was a compromise," she said.