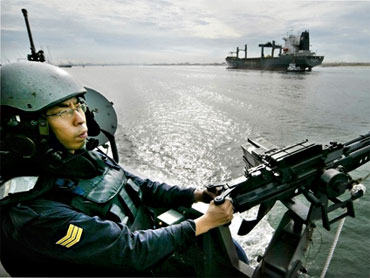 Singapore's Navy warned that a terrorist group is planning attacks on oil tankers in the Malacca Strait, one of the world's busiest shipping lanes.

Terrorists also may target other vessels in the shipping lane off Malaysia's east coast, according to an advisory issued Wednesday by the Navy's Information Fusion Centre seen by The Associated Press.

"The terrorists' intent is probably to achieve widespread publicity and showcase that it remains a viable group," the Navy advisory said. "However, this information does not preclude possible attacks on other large vessels with dangerous cargo."

The Navy did not say which terrorist group is planning the attacks. Spokesmen at the Defense Ministry and the Information Fusion Centre were not immediately available for comment.

The Malacca Strait is the favorite route of oil shippers between the Persian Gulf and Asian Pacific markets. The strait, just 1.7 miles (2.7 kilometers) at its narrowest point, was the second-busiest shipping lane of crude in 2006, with 15 million barrels a day passing through, according to the U.S. Energy Information Agency.

Singapore lies at the southern tip of the Malay peninsula and is home to the world's busiest port.

Indonesia has not received any information from Singapore about possible attacks but plans to boost air and sea patrols, Defense Ministry spokesman Brig. Gen. I Wayan Midio said.

"We are committed to increase the awareness and security in the Malacca Strait to anticipate any terrorist attacks," he said.

Indonesian police on Thursday charged 14 suspected Islamist militants with planning terrorist attacks after they were captured in raids since Feb. 22 on Sumatra island, which forms the eastern boundary of the Malacca Strait. Their alleged targets weren't disclosed.

Police are investigating if militants are linked to Jemaah Islamiyah, one of the most active terror networks in Southeast Asia. Police have blamed the group for suicide bombings of the J.W. Marriott and Ritz Carlton hotels in Jakarta in July 2009 that killed seven people and bombings on the island of Bali in 2002 that killed 202 people.

The Singapore Navy said small fishing boats or speedboats were used in past successful terrorist attacks against ships, and these kinds of vessels could be used in the Malacca Strait.