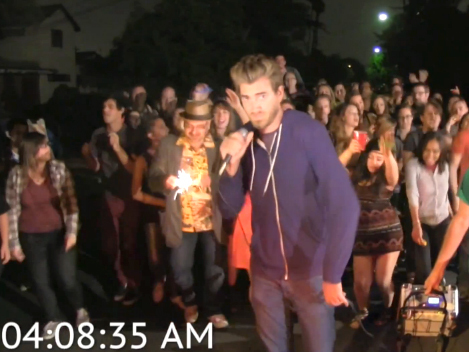 (CBS News) The year was 1983 and a certain Lionel Richie hit song was playing on radios everywhere day and night. One might even say it was playing "All Night Long" (ba-dum-bump) . Now, almost twenty years later, the song has been taken to its logical and literal conclusion...

I personally loved the mini-confrontation that takes place at about 1:10 with the response of "He's just awesome." Yes. Lionel Richie is just awesome.

The hilarious stunt was done by Rhett and Link, who were most recently featured here on The Feed for their phenomenal "Epic Rap Battle of Manliness", and who write about their latest:

11 hrs of continuous singing crammed into 4 mins. Sunset to sun up.

Bravo, gentlemen! We here at The Feed would like to award you another triple-rainbow salute of awesome and tip our hats to your dedication to comedy (and Lionel Richie, of course). To check out more hilarious videos from Rhett and Link, you can visit their YouTube page by clicking here.