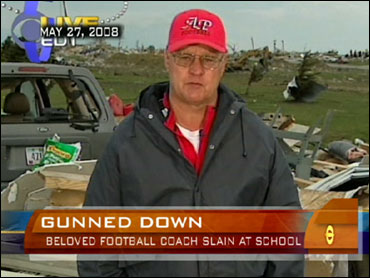 The sons of a beloved, nationally-known Iowa high school football coach murdered in cold blood want state lawmakers to make it mandatory that police officers who drop off suspects at hospitals for mental evaluations be notified before those suspects are set free.

Aaron and Todd Thomas spoke with "Early Show" co-anchor Harry Smith Wednesday, the day after Mark Becker, 24, was found guilty of first degree murder in the shooting of their father, Ed Thomas, 58, coach of Aplington-Parkersburg High. Becker is slated to be sentenced in April, and faces the possibility of life in prison.

Aaron says he was pushing legislators Tuesday for the change.

Becker was released from the psychiatric ward of an area hospital the day before the killing.

He also told Smith, "Obviously, we're pleased with the verdict and the way the jury ruled. … (But) none of this changes really anything. My dad's still gone. He's in a much better place now but, for us, it gives us peace of mind knowing that's one less thing we have to worry about. And now, hopefully, we can get out of the cameras' way from Parkersburg and go back to being a small town and begin healing."

Todd expressed empathy for Becker's relatives, who still live in town, saying, "We can't even imagine what their family is even going through right now. They're a great family. And, by no means did they ever imagine that their son would do something like this. Like I said, they're not the people to blame."

Becker gunned down Thomas in June in the school's makeshift weight room in front of students, shooting him at least six times before walking away. Becker later told police Thomas was Satan and that the coach had been tormenting him.

The facts were never in dispute at Becker's trial, according to CBS News Correspondent Cynthia Bowers. The only question was whether Becker was legally sane when he killed Thomas.

Thomas, says Bowers, "was more than a coach -- he was an icon who spent three decades on the sidelines and in the classroom urging generations of young people to "do the right thing."

For instance, in the aftermath of a May 2008 tornado that killed six and wiped out a third of Parkersburg, Thomas immediately set to work rebuilding the high school stadium, believing Friday night football would restore a sense of normalcy. He was right, Bowers says.