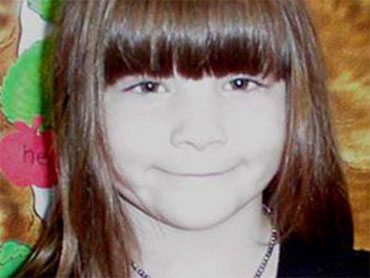 An unemployed restaurant worker was charged Friday with sexually assaulting and killing 7-year-old Somer Thompson, whose body was discovered in a Georgia landfill two days after she vanished walking home from school in north Florida.

Jarred Mitchell Harrell, 24, faces charges of premeditated murder, lewd and lascivious battery and sexual battery. Somer was lured into Harrells' parents' home and later asphyxiated and tossed into a trash bin, Clay County Sheriff Rick Beseler said, but he did not want to give too many details about her death.

"I've waited 158 days to find out who did this to my child," said Somer's mom, Diena Thompson. "Who could do this?"

She didn't hold back, adding, "A monster. That's all this person is, a monster."

And she had a message for Harrell: "I would like to take this opportunity to say … we got you, and you ain't getting away."

When his name surfaced, it was one of more than 4,000 leads in the case, reports CBS News Correspondent Kelly Wallace.

Somer's case - an innocent little girl vanishing from a quiet suburban street - resonated with many.

"It could have been any one of our children," the sheriff said.

The discovery of her body touched off fear and an outpouring of grief in northeast Florida and southern Georgia for the Thompson family -- as well as support: Days of vigils and fundraisers were held so Somer's mom would have enough money to stay home with her other children. A mountain of stuffed animals, balloons and notes to the family sprung up near a tree across from the little girl's home.

"Somer was such a bright star that never got her chance to shine," her mother said.

She's calling on communities nationwide to unite and take action, stressing, "This isn't Mayberry anymore. We, as parents, as community leaders, as citizens, we need to get together and figure out what it is that we're not doing right."

"The pulse of our country is looking at cases like this with just an eagle eye," attorney and In Session correspondent Jean Casarez remarked to "Early Show Saturday Edition" substitute co-anchor Kelly Cobiella," which will, Casarez says, add to what already will be a "very difficult, very difficult" case for the defense.

Still, Casarez pointed out that police dogs were in Harell's parent's house's backyard and didn't flag any scents. She noted a defense lawyer could say, "'He didn't do it. The dogs didn't even see it." They might also try an insanity defense, but that, too, is "very difficult," Casarez said.

During a press conference at the same church where Somer's memorial service was held, Beseler said detectives used DNA evidence, witnesses and statements from Harrell to solve the case.

"Our collective resolve to bring Somer's killer to justice is the only light in the darkness caused by this tragedy," Beseler said as about 50 members of "Team Somer" - the sheriff's office investigators and staff who worked the case - stood by.

Harrell's relatives have said they don't believe he is capable of violence. Messages left at the public defender's office were not immediately returned.

Prosecutors can seek the death penalty in this case, but they have not said whether they will do so.

Somer's mother said she would support prosecutors' efforts if they decide to seek capital punishment.

Clay County detectives said at the time of Somer's disappearance, Harrell was living at his parents' suburban Jacksonville home, near her home and school.

On a hunch, they tailed nine garbage trucks from her neighborhood to the landfill and picked through the trash as each rig spilled its load. They sorted through more than 225 tons of garbage before they spotted her legs sticking out of the trash.

Harrell had come to the attention of law enforcement in August, two months before Somer disappeared. His roommates said they kicked him out for stealing and they discovered child pornography. It was soon turned over to investigators.

The parents of one the roommates drove by Harrell's parents' home a few days after Somer disappeared and noticed how close they lived to the girl's house. When they saw Harrell's car in his parents' driveway, they told detectives.

He was arrested on the child pornography charges at an aunt's home in Meridian, Miss., where he had moved a few weeks earlier.

Beseler said Somer was not in Harrell's parents' home for long. "I believe it was something that went rather quickly," he said.

When Somer's mother mentioned the asphyxiation at her own news conference, her older sister fainted.

Thompson's voice, however, was unwavering.

"I'd like to take this opportunity to say to Jarred Harrell that we got you and you ain't getting away," she said. "He had an impulse and he took something away from me. Why would you take away your own life for my seven-year-old daughter, my baby?"