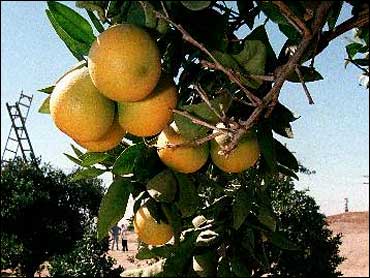 Three citrus contractors were sentenced to prison terms Wednesday for enslaving undocumented farm workers, threatening them with violence and holding them hostage over alleged debts.

The three men were convicted in June of involuntary servitude, harboring undocumented workers, interfering with interstate commerce by extortion and using a firearm.

Brothers Ramiro and Juan Ramos employed more than 700 farm laborers, many of them undocumented immigrants from Mexico.

"The whole thing is a farce," he said. "They are victims in this case because growers and other members of the industry have their heads buried in the sand."

The FBI and Border Patrol investigated after the Coalition for Immokalee Workers, in southwest Florida's farming region, called attention to the abuses.

Staff member Julia Perkins said it was the fifth case that resulted in convictions on similar slavery charges in as many years. She accused the state agriculture industry of looking the other way as contractors employ illegal aliens who have few rights.

"We hope that it will send a message that it's time for these abuses to stop," Perkins said. "The agriculture industry is complicit in some way."

State agriculture department spokesman Terrence McElroy said the industry should not be blamed for the actions of a few.

"Most Florida growers treat farm workers fairly," he said. "It obviously is outrageous conduct, and to suggest that it is condoned is unfair."