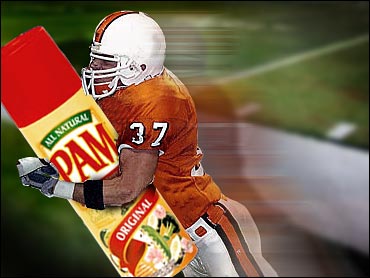 Despite their best efforts, Sacramento State players have gotten themselves into a sticky situation.

Several of the Hornets greased their jerseys with nonstick cooking spray on the sideline during their 31-24 loss at Montana last weekend, the Big Sky Conference said Thursday.

Before determining a punishment, the league and Sacramento State are trying to figure out how many players used the spray and whether coaches knew.

"We'll decide the penalty, depending upon who we find at the bottom of the pile," Big Sky commissioner Doug Fullerton said. He expected to announce his decision Friday.

"I think it's a serious ethical breach," Fullerton added.

Hornets coach John Volek said he didn't know anything about it, but he was not on the sideline during the game. He was serving a one-game suspension for complaining about officiating in his team's 31-30 loss to Montana State a week earlier.

The Grizzlies, No. 1 in Division I-AA and the defending national champion, rallied from a 21-14 deficit to beat Sacramento State and tie the division record with a 24-game winning streak.

Todd Goodrich, a University of Montana photographer, said he saw two Sacramento State players spraying each other near the end of the first half.

During the second half, Goodrich saw two more players spraying each other with a can of PAM and snapped several photos.

"They were pretty blatant about it," Goodrich said. "Right there on the sidelines."

The photos were being turned over to the league. The University of Montana declined to provide copies to The Associated Press. The school said Grizzlies players also were told not to comment.

Montana athletic director Wayne Hogan said he was taking the pictures to Fullerton on Saturday in Spokane, Wash., where Montana is playing Eastern Washington.