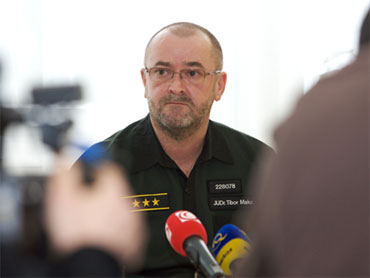 Slovak officials on Wednesday blamed "a silly and unprofessional mistake" for a failed airport security test that led to a man unwittingly carrying hidden explosives in his bag aboard a flight to Dublin.

Dublin security chiefs said it was foolish for the Slovaks to hide bomb parts in the luggage of innocent passengers under any circumstances.

Slovak Interior Minister Robert Kalinak expressed "profound regret" to the Irish government for the oversight and the three-day delay in alerting Irish authorities about the Saturday incident.

The explosives never posed a danger to the flight, the interior ministry said Wednesday, even as it ordered an immediate halt to such tests and took steps to prevent a repeat of failed security test.

Tibor Mako, the head of Slovakia's border and foreign police whose people carried out the exercise, offered his resignation Wednesday. There was no immediate word on whether it would be accepted.

Security experts said the episode illustrated the inadequacy of security screening of checked-in luggage - the very point the Slovak authorities had sought to test when they placed real bomb components in nine passengers' bags Saturday.

"The aim of the training was to keep sniffer dogs in shape and on alert in a real environment," the ministry said.

Eight items were detected. But one bag had two bomb components in it. The sniffer dog found one but the police officer in charge failed to remove the second, which was not detected by the dog, because he was busy, the ministry said.

That allowed 90 grams (3 ounces) of RDX plastic explosive to travel undetected through security at Poprad-Tatry Airport in central Slovakia onto a Danube Wings aircraft. The Slovak carrier launched services to Dublin last month.

"The police officer made a silly and unprofessional mistake, which turned the good purpose of protecting people into a problem," the statement said.

Slovak authorities realized their error and told the pilot of the Danube Wings flight, who then decided to still take off with the sample on board, the ministry statement said.

"No one was in danger, because the substance without any other components (needed to bring it to a detonation) and under the conditions it was stored, is not dangerous," the ministry said.

Slovak border police subsequently traced the man and told him where the explosive was planted so that he was able to find it Monday evening, said the ministry. Kalinak, the interior minister, called him to apologize.

The man was not identified. Slovak media said he is a 49-year-old electrician who works and lives in Ireland.

The ministry said it contacted Irish authorities and explained the situation on Tuesday, prompting Irish police to raid the man's Dublin apartment. A major north Dublin intersection was shut down Tuesday and neighboring apartment buildings were evacuated as a precaution while Irish Army experts inspected the explosive.

The man was detained for several hours then released without charge.

Irish police said they initially were led to believe the man might be a terrorist until the Slovaks explained the situation further.

Irish Justice Minister Dermot Ahern said Dublin police eventually confirmed that the explosive "was concealed without his knowledge or consent ... as part of an airport security exercise."

"For an incomprehensible reason for us, they took the person into custody and undertook further security measures," it said.

Authorities in Slovakia were considering "new forms of sniffer dog training" to avoid a repeat of the scare, the ministry said.