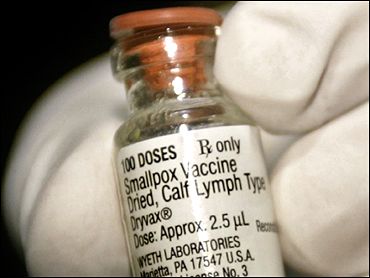 Lawmakers and the White House reached agreement Thursday on payments for people injured by the smallpox vaccine, said Sen. Edward Kennedy, removing one barrier to the stalled inoculation program.

"The compromise that we have reached tonight provides the nation's health care workers with an effective compensation program that will give them confidence they need to participate in the smallpox vaccination program," said a statement from Kennedy, D-Mass. "They deserve nothing less, and our nation's security demands it."

Response has been lackluster to the federal vaccination program, established to prepare for the possibility of a bioterror attack with smallpox. That's partly because the vaccine carries rare but serious risks, including the possibility of severe rashes, blindness and life-threatening infections.

As many as 40 out of every million people vaccinated for the first time will face a life-threatening injury, and one or two will die. Three people have died this year after receiving the vaccine, but it's unclear that their heart attacks were caused by the vaccine.

The death of an 22-year-old Army medic last week is also under investigation. She was diagnosed with lupus, an autoimmune disorder, after she fell ill after getting a smallpox vaccination. Immunization experts have advised those with weakened immune systems to avoid the vaccine.

Officials hope that establishing payments for those injured by the vaccine will encourage more people to be vaccinated.

Initially, federal officials hoped to vaccinate nearly 450,000 health care workers and another 10 million emergency responders, but after more than two months, fewer than 32,000 people have gotten the inoculation.

Because of its risks, the vaccine is not recommended for the general public.

The agreement reached Thursday provides more money for people killed, seriously injured and modestly injured by the vaccine, according to Kennedy aides who outlined its provisions.

Under the deal, families of people who are killed by the vaccine and die with no dependents would get a lump sum payment of $262,100, an amount based on an existing compensation program for police and firefighters.

The estates of those who are killed with dependents could choose the lump sum payment or up to $50,000 per year to make up for the deceased's lost wages. Those payments would continue until the victim's youngest child reached age 18.

Those who are totally and permanently disabled would get up to $50,000 per year for lost wages for the rest of their lives, with no cap.

Those who are permanently but not totally disabled, and those with a temporary disability, would get lost wages up to a maximum of $262,100.

Under the Bush plan, people were only paid lost wages after five days of missed work. Under the new agreement, someone who was out of work for at least 10 days would get lost pay for every day.

Finally, a Bush provision that required people to get vaccinated within 180 days if they want to be eligible for compensation was removed.

The provision will be inserted into a spending bill that is expected to be approved by both houses of Congress on Friday.

The Bush plan had offered $262,100 — not the $50,000 per year option — to those who are killed or totally and permanently disabled by the vaccine. People less severely injured would have only been able to get up to $50,000 total in lost wages, plus unpaid medical expenses.

Last week, the House defeated a Republican bill, with many lawmakers complaining that compensation was not generous enough. Democrats on the Senate Health, Education, Labor and Pensions Committee made similar points as they opposed a plan that was approved by the panel on a party line vote.