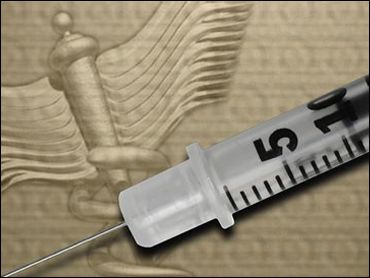 The Bush administration plans to offer the smallpox vaccine to the general public, but officials weighing the risk of the vaccine against the risk of bioterrorism remain divided over how quickly to act.

Top federal health officials want a staged process where the vaccine would not be offered to the general public until it is fully licensed, probably in early 2004. But some in the White House are pushing for a more aggressive policy, vaccinating much of the nation quickly, even while the vaccine remains an experimental drug.

No final decision has been made.

The first batch of shots will be licensed in November, but it will be over a year before enough licensed vaccine is available for mass inoculation.

Health officials who direct the bioterrorism preparedness program said Friday they support a staged process whereby the vaccine would be offered first to those facing greatest risk of encountering a highly contagious smallpox patient, mostly people who work in hospital emergency rooms.

Other health care workers, police, fire and eventually the general public would follow.

A senior White House official, speaking on condition of anonymity, confirmed that plans are to offer the vaccine to the general public, but said that might happen very quickly - possibly in a matter of weeks.

The official added that the program would be accompanied by a massive education program to persuade people that the vaccine's benefits outweight its risks, which are rare but serious and include death.

A second White House official reflected the views of the health officials, saying the vaccinations would be offered, but much more slowly.

The smallpox decision is a difficult one. An attack could be devastating: the virus kills one-third of its victims. But the vaccine itself is risky and no one knows whether an attack will ever come.

Just a few months ago an advisory committee said the shots should only go to a handful of people working in state smallpox response teams and at select hospitals.

But since then, the United States has pushed toward war with Iraq, which experts fear has smallpox germs and could release them in an act of bioterror, said Dr. Julie Gerberding, director of the Centers for Disease Control and Prevention.

"We need to be mindful that the context of this decision has changed a bit," she said.

Smallpox hasn't been seen in this country for a half-century, and routine vaccinations ended in 1971. In 1980, the disease was declared eradicated from the globe. Officials aren't sure how much protection remains for adults who were vaccinated as children.

Under the plan health officials favor, the vaccine would first be offered to people working in emergency rooms - from doctors and nurses to janitors and security guards - because a smallpox patient is most likely to go to an emergency room seeking treatment. Also in the first round are state teams that would investigate any suspicious patients.

An estimated 500,000 people are expected to take the vaccine during this first phase, said Jerry Hauer, the top bioterrorism official at the Department of Health and Human Services.

In the next phase, the vaccine would be offered to about 10 million others, including all other health care workers plus police, fire and other emergency workers.

At some point after that, the vaccination would be offered to the general public.

"We live in a society that values individual choice," CDC's Gerberding said.

Dr. Anthony Fauci, director of the National Institute for Allergy and Infectious Diseases, noted that it's possible that Bush will opt to speed up the timetable.

Just a year ago, the nation had only 15.4 million doses of vaccine, but there now is enough for every American, thanks to fast-track purchasing, studies that found the existing vaccine can be watered down and a drug company that discovered 86 million doses in its freezer.

But none of this has yet been licensed by the Food and Drug Administration. Absent that, vaccinations would require a lengthy procedure ensuring that people understand and accept the risks.

Gerberding said health officials "very much" favor waiting until the vaccine is licensed, though they will support whatever final decision is made.

Studies from the 1960s suggest that 15 of every million people getting vaccinated for the first time will have life-threatening complications, and one or two of them will die.

The smallpox vaccine is effective even after someone is exposed to the disease, but only for a few days.

Officials also are preparing plans for mass vaccination should an attack occur, a prospect considerably more complicated than vaccinating people in advance.