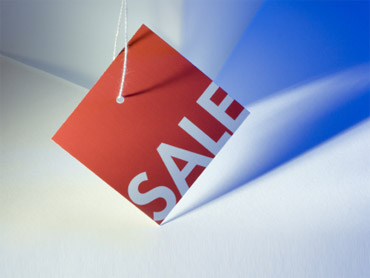 Timing is everything - and that includes holiday shopping.

Many of us wait for "Black Friday" -- the big sales that start the day after Thanksgiving.

You may not have to wait for Black Friday to score some of the best bargains - and holding off could cost you.

On "The Early Show," Lewis offered advice on what to buy now and what to wait for:

There's not really a big market for charcoal grills after summer, and retailers don't want to store these for six months. Sending them back to a warehouse costs money, too. They'd rather just sell them to you at a deep discount and not have to deal with them over the winter. And Weber, the grill company, tells us that one 1 of 10 Americans cook their Thanksgiving turkeys on an outdoor grill … so could be a new way to cook the bird this Thanksgiving.

Even more impressive is the deal we found on a cutlery set from J.A. Henckels Cutlery. This 13-piece set is forged from high-carbon stainless steel, then hand-honed for precision sharpness, each knife will be at its sharpest when performing the task at hand. We found it at Macy's (online and in the store) for $100! This set is regularly $270. We saved $170 dollars, or 63 percent!

Stores tend to start selling outerwear well before it's time to wear it. So, while it was rolling out at full price in September and early October, you weren't as likely to find a deal. But it just so happens that right now, as it's starting to get cold in most places, sweaters, coats, and vests are all on clearance.

If you're a fan of Old Navy, you're in luck. Right now Old Navy is offering 50 percent off all outwear for women, men, kids and adults while supplies last. The offer is available for items in the stores and online. The sale covers their wool, leather, "frost-free" and many other styles.

But wait -- there's more: This Thursday, LandsEnd.com is launching a special "Family and Friends" promotion, including a special "discount code" for Early Show viewers. By shopping now and using deal code "earlyshow" and promo PIN "2010," viewers will get instant / early access, 30 percent off all orders, and free shipping on any order over $50 on LandsEnd.com.

Every year, television prices decrease by 20-25 percent around the holidays, but this year, discounts may be steeper. According to industry analysts, the supply of flat-panel TVs far surpasses demand. At the beginning of the year, manufacturers were expecting expensive LED screens and 3-D sets to keep prices relatively stable. Many other manufacturers thought the World Cup would fuel sales. As it turns out, though, U.S. consumers haven't responded very enthusiastically, and aren't willing to pay more for higher-quality displays. Now, major companies are simply looking to cut their losses -- and, of course, their prices. "There's going to be a price war this Christmas season, and there's no way around that," says Tsutomu Yamada, a market analyst in Tokyo. "The whole strategy this year is 'sell earlier and sell for less.' That makes life miserable for the manufacturers." Bad for them, great for us. Forecasters say there could be a great deal of flat-screen televisions in Santa's sleigh this Christmas, but you don't have to wait until then to pick up this big ticket item.

These rock-bottom deals are often for off-brand TVs - some you may not be entirely familiar with. DealNews.com predicts that Black Friday will bring great deals on no-name brands, but you'll have to stand in long lines to get the best of the Black Friday deals. Instead, you can find great prices on televisions all November long. If you are after the top brands, prices on those sets are more likely to drop as we get into December, closer to the holidays.

There are signs the chill on holiday spending is beginning to thaw. Consumers may not be giving gifts like it's 2006 again (before the Great Recession), but new surveys suggest some will spend a bit more and start giving presents that people want rather than simply need this year. Think jewelry (rather than slippers and sweaters). For example, the percentage of those who will ask for jewelry this year is up 13 percent, according to National Retail Federation. So even though demand for non-discretionary gifts such as jewelry is expected to rise this holiday season over last, we were able to find some amazing jewelry deals.

With customers beating down the doors, jewelers have little to no incentive to offer up discounts this time of year. You tend to get more bling for your buck online. Business on one online jeweler, ICE.com, will surge by 40 percent at this time of year, it predicts. Customers will have access to the best deals on jewelry without having to stand in line. Christmas is the busiest time of year for jewelry, followed by Valentine's Day (which is also not that far away!)

The end of the year will be here before you know it. Did you know that upcoming changes will impact the use of Flexible Spending Accounts to buy many over-the-counter health products you won't be able to buy anymore? (FSA is a special account that allows you to set aside part of your pre-tax wages to pay for certain healthcare expenses for you and your family.) Think about getting many of your go-to over-the-counter buys now to maximize your FSA savings. A good place to start is Drugstore.com's FSA store. According to the site, they have over 3,000 FSA-eligible items on sale already. (Beginning January 1, 2011, fewer over-the-counter products will be automatically eligible for FSA. Item eligibility will be updated on the drugstore.com FSA Store to reflect the changes.)

You know you're going to be bombarded with special offers and advertisements for the rest of the holiday season, but some of these deals get a lot sweeter if you wait until the end of the holiday shopping season or even next year. Don't be tempted by lukewarm deals on these items this month.

Stores will advertise great savings for your holiday shopping in November. Starting around Thanksgiving, you'll find this season's hottest denim trends for about 20-30 percent off in most stores. Sure, it's a discount, but if you're buying jeans for your teenager's Christmas gift, wait until closer to Christmas. You'll find jeans marked down more like 50 percent in late December.

If you've been coveting an iPad for months, you may thing a Black Friday sale is the perfect excuse to treat yourself, but not so fast. Despite rumors of huge Black Friday deals, Apple's holiday specials have been lackluster over the past few years, and Dealnews.com predicts more of the same this year -- maybe you'll score free shipping, but you might find better deals after the holidays, but don't hold your breath for big discounts.

Retailers use January white sales to clear out their remaining fall and winter stock, so hold off one linens, sheets, towels, etc. You'll get more bang for your buck after the 1st of the year. Look out for "while sale" time! In fact, January has been "white sale" time since 1878.