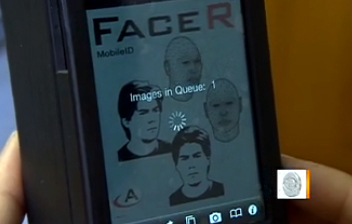 Police have used fingerprints to identify people for over a century. Now, they have a new tool.

Technology enables them to identify faces to help tell who's on the right side of the law.

But as this innovation gains popularity within law enforcement, it's also drawing criticism from those who say it puts people's privacy at risk.

Currently, to verify someone's identity, officers have to type a name into a computer to see if it comes up with a match in various databases. Now, as CBS News Correspondent Elaine Quijano reported, there's mobile technology enabling police to perform that same check in an instant.

The new devices cost $3,000 each and attach to the backs of smart phones.

Mullin explained that users take a photo, then use the technology to match it against an existing database over a wireless connection. The device will bring back the face of anyone it thinks the person is -- and two additional likely candidates.

With the device, police will instantly be able to check to see whether the face is that of someone with a criminal record.

Mullin, whose company developed the technology, says there are protections in place to ensure it can't be misused.

Quijano asked, "How foolproof is this technology?"

Mullin replied, "None of the data stays on the device. It can only be used by authorized individuals who are pre-authenticated on the network and on the device."

But some argue that scanning faces is a no different than a search requiring a warrant. There are also fears that this unregulated technology puts the privacy of law-abiding citizens at risk.

John Reinstein, legal director of the ACLU of Massachusetts, told CBS News, "The fact that they're agreeing voluntarily not to retain information doesn't keep them from deciding at some point in the future that they will."

The device has already been tested in Plymouth County, Mass. Sheriff Joseph McDonald plans to outfit a handful of his deputies this fall.

McDonald said, "It's going to allow that officer on the street to get virtually instantaneous access to that database, to retrieve that information very, very quickly."

McDonald says he also understands the concerns the device raises over civil liberties and privacy. His guidance to his deputies is to not use facial recognition unless they suspect some sort of criminal activity has occurred.

He explained, "There has to be some sort of contact, some sort of reasonable circumstance under which the officer would employ that technology."

Quijano added on "The Early Show" that the company, BI2, has orders from about 40 law enforcement agencies to deliver around 1,000 devices. This same kind of portable technology has been used in the past by the military to identify people, including possible terrorists in Iraq and Afghanistan.