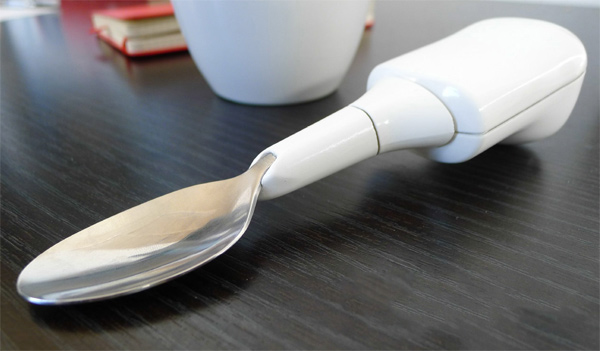 For many people living with Parkinson's disease, the mere act of chewing and swallowing can be a challenge. One way to deal with this is to blend foods up to minimize the need to chew. But what if it's difficult merely bringing the spoon to one's mouth without spilling its contents?

The folks at Lift Labs say the spoon uses an "active cancellation of tremor" technology that works to counteract the tremors people can experience in their hands and help prevent spills.

The Liftware spoon constantly steadies itself thanks to an embedded computer that takes the motion signals detected by the sensors, identifies the user's tremor, and then moves the spoon in the opposite direction of that tremor. The company reports that lab tests showed a more than 70 percent reduction in tremors.

And while it won't be the first utensil on the market to help people with tremors eat with dignity, it's probably the smartest. Many existing utensils, plates, mugs, and "crumb catchers" (yes, these are bibs) are pretty old tech, focusing on ergonomics and extra hand and finger holds.

The folks at Lift Labs say the spoon will cost $295, and they've also developed a related free iOS and Android app called Lift Pulse that records a person's tremor using the phone's built-in accelerometers and calculates its magnitude. Users can set a baseline tremor that subsequent readings are compared to.

Maybe someday spoons will be smart enough to be customizable to each user based on previous readings and baselines adjusted for time of day, energy level, and so on. For now, Liftware looks like the first step in that direction.