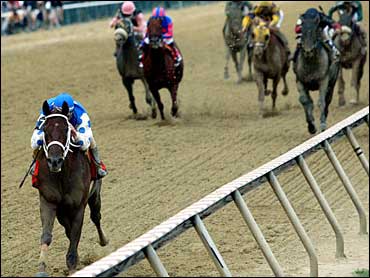 The move came in a flash.

Lion Heart had the lead, Smarty Jones was lurking and jockey Stewart Elliott was waiting for the right moment to go. The Preakness was setting up according to plan.

Around the far turn, Elliott angled his Kentucky Derby winner to the inside of the pacesetter, and the horses entered the stretch together.

And then the race was over.

With one breathtaking surge, Smarty Jones left the field far behind, his lead building with every powerful stride over the final eighth of a mile. By the time he crossed the finish line, the little chestnut colt had delivered a record 11½-length victory to set the stage for a dramatic Triple Crown try at the Belmont Stakes in three weeks.

"I had another gear left. Unfortunately, when I hit the other gear, Smarty Jones hit about four more gears," said Gary Stevens, who was aboard runner-up Rock Hard Ten. "Smarty Jones looks like he's just getting warmed up right here at the finish."

Even after 1 3-16 miles on a hot and hazy afternoon at Pimlico, the undefeated Smarty was still running hard well beyond the finish line. The Belmont is 1½ miles, the longest of the Triple Crown races, but there seems to be no stoppin' him now.

"I have a good horse, but that was a great horse that beat us," Rock Hard Ten's trainer, Jason Orman, said.

Elliott won't quibble with that.

"He's just unbelievable. He just keeps getting better, this son of a gun. I mean, he just did it so easy," the jockey said.

Smarty Jones is eight-for-eight with one to go in his bid to become just the 12th Triple Crown champion and the first to sweep the Derby, Preakness and Belmont since Affirmed in 1978.

He would also claim another $5 million bonus and become racing's richest horse.

The record crowd of 112,668 roared when Elliott asked this sensational Pennsylvania-bred to make his winning move. Down the stretch, the 39-year-old rider merely tapped him with the whip twice in the final eighth-of-a-mile, and Smarty took off like a shot. The margin of victory topped the record of 10 lengths by Survivor in 1873, in the first Preakness.

Lion Heart, runner-up in the Derby, faded to fourth. Rock Hard Ten, in just his fourth start, finished strong for second ahead of Eddington. Imperialism was fifth, followed by Sir Shackleton, Borrego, Little Matth Man, Song of the Sword and Water Cannon.

"Smarty Jones, man, he's just an amazing horse," said Mike Smith, who was aboard Lion Heart. "I think me and Gary are on some great colts, just born in the wrong years."

The overpowering win put in place some mind-boggling possibilities for the 3-yard-old who has captured America's fancy — as Funny Cide did last year before his Triple Crown bid fell short in the Belmont.

Smarty Jones will be the sixth horse in the last eight years with a Triple chance, but there's a big difference this time around: Smarty is the only one who hasn't lost.

"He came through for America. I'm so impressed with his effort," trainer John Servis said. "I knew he had to bring his best game. I knew this was the toughest race he was going to be in in a long time. And he brought it. He brought it big time."

So much so that Stevens compared him to one of the greatest of champions of all time.

"Smarty reminded me of Secretariat, the way he pulled away," he said.

A victory in the Belmont and Smarty Jones would join Seattle Slew as the only Triple Crown winners with unbeaten records. Smarty, like Slew in 1977, would be 9-for-9.

The son of Elusive Quality would also surpass Cigar as the richest racehorse in North America. Smarty would earn a $5 million bonus from Visa with a Triple Crown sweep. Add his purse money, plus the $5 million bonus he already earned from Oaklawn Park for winning the Rebel Stakes, Arkansas Derby and Kentucky Derby, and Smarty's total would top $13 million. Cigar earned $9,999,815.

Smarty became racing's best story even before the Derby because of his soap-opera history: He nearly died when he slammed his head on an iron bar; his trainer and jockey are based at small-time Philadelphia Park; and the Chapmans once refused a blank check to sell him. Roy is

Since the Derby, it's been one Smarty party after another. The horse got a hero's welcome when he returned to Philly Park, where about 5,000 fans showed up to watch him jog around the track.

Perhaps no one is enjoying the party more than the Chapmans. Roy, who turned 78 three days after the Derby, uses a wheelchair and needs an oxygen supply tank to help with his emphysema.

Smarty's success, he says, has energized him.

"Some day, somewhere, he's going to get beat," Roy Chapman said. "We're trying to put that off as long as we can."

And now it's on to the Belmont on June 5, where New York Racing Association officials are expecting "the biggest day in New York racing history," NYRA senior vice president Bill Nader said.

Servis says Smarty will be there "as long as he tells us he's ready."

The largest crowd for a Belmont was 103,222 in 2002, when Derby and Preakness winner War Emblem stumbled at the start and finished eighth.

Among the challengers Smarty could face are Derby starters Birdstone, Friends Lake, Master David, Read the Footnotes and Tapit. Other possible starters include Mustanfar, Relaxed Gesture, Sinister G and Royal Assault, who won the Sir Barton on the Preakness undercard.

"He'll do whatever I want him to do," Elliott said, referring to the Belmont's demanding distance. "It won't be a problem."

The jockey has handled his newfound fame well, but he's also encountered the downside of being in the spotlight.

Elliott admitted Friday that he battled alcoholism several years ago. The revelation came after Kentucky racing officials fined Stewart $1,000 for failing to disclose on his Derby application that he pleaded guilty in 2001 to an assault charge. That same year, the jockey also pleaded guilty to charges of assault and criminal mischief involving a former girlfriend.

"I just think about the past and I look where I was and now, the future," Elliott said. "Look where I am."