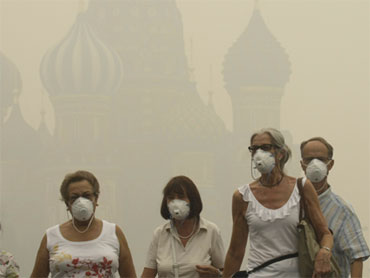 A suffocating smog from wildfires hung over the Russian capital Saturday, raising the concentration of dangerous pollutants to a new high as exasperated residents donned masks and dozens of flights were delayed or diverted at the city's airports.

The thick haze engulfed Moscow for a second straight day as southeastern winds blew smoke from the areas worst affected by peat bog and forest fires. Weather experts said the winds are unlikely to change over the next few days.

The concentration of airborne pollutants such as carbon monoxide has further intensified and is at more than six times normal levels, according to city health officials - the worst seen to date in Moscow. The smog has seeped into buildings and the city's subway system.

"I can't bear it any more," said Anna Kozyreva, 25. "My parents have left the city. All I want to is breathe normally, but my job doesn't allow me to leave."

"The smoke is everywhere - at home, in shopping malls, on the subway," added Roman Morozov, a 29-year old architect.

Visibility was down to a few hundred meters, and dozens of flights bound for Moscow's Domodedovo and Vnukovo airports were diverted to other airports or delayed.

Nearly 600 separate blazes were burning nationwide Saturday, mainly across western Russia, according to the Emergencies Ministry, which said that the area affected had increased over the past 24 hours. Hundreds of forest and peat bog fires have ignited amid the country's most intense heat wave in 130 years of record-keeping.

Russian health officials have urged those who have to go outdoors to wear face masks and told people staying inside to hang wet towels to attract dust and cool the airflow. The Russian Health Ministry said hundreds have needed medical attention due to the smog.

Yelena Lezina, an expert with Moscow Ecological Monitoring Service, said the level of air pollution on Saturday was the highest the city had seen. She advised residents to stay indoors.

"An overwhelming part of Russian territory does not pose any danger and is not engulfed in smoke," he said, according to the Interfax news agency.

But he added that foreigners who are in Moscow on business trips should heed doctors' advice and stay indoors for now.

"If a businessman visiting Moscow stays in a hotel, or an office, or a car, it is safe," Onishchenko said. "As for tourists, some adjustments could be made. For instance, visit first St. Petersburg, where everything is fine, and then Moscow, when the situation improves."

At least 52 people have died and 2,000 homes have been destroyed in the blazes. Russian officials have acknowledged that the 10,000 firefighters battling the blazes aren't enough - an assessment echoed by many residents, who said the fires swept through their hamlets in minutes.

Some city residents angrily denounced the authorities for failing to do enough to help the population.

"People are left on their own here in Moscow," said Natalia Lancerot. "We are actually shocked that no one cares about people. They should maybe hand out protection masks."

President Dmitry Medvedev donated 350,000 rubles (about $12,000 or euros 9,000) of his own money to help the victims of the fires, and other top federal officials were expected to follow suit, the Kremlin said Saturday.

Russian television on Saturday showed two Italian firefighting amphibious planes arriving in the Samara region on the Volga River to help save a natural preserve engulfed by fires.

A wildfire last week caused huge damage at a Russian naval air base outside Moscow. The military rushed Saturday to extinguish new wildfires outside a missile attack warning center in the same Kolomna area southeast of the capital.

Moscow and most of western Russia has had temperatures approaching 38 degrees Celsius (100ºF), and that is forecast to stay unchanged over the next week in contrast to the area's average summer temperature of around 23ºC (75ºF).
By Associated Press Writer Vladimir Isachenkov