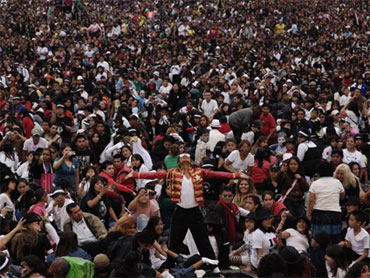 The official, who spoke on condition of anonymity, said Una James, 38, dropped battered spouse claims that were part of a petition she withdrew seeking special protection in the United States. An immigration judge then signed an order deporting her to Jamaica.

The order was issued Tuesday during a closed hearing.

The official said James also dropped any plans to appeal, meaning she will be sent back to Jamaica soon by the Immigration and Naturalization Service.

Malvo, 17, and John Allen Muhammad, 41, are suspected in the shootings of 18 people in Maryland, Virginia, Washington, D.C., Alabama, Georgia and Louisiana. Their arrest at a rest stop in Maryland last month ended a three-week shooting spree in the Washington area that left 10 people dead and three others seriously wounded. Both are charged with capital murder.

James is considered a likely material witness in the trials of both men.

She and Malvo moved from Jamaica to Antigua in 1998. Investigators believe it was there that Malvo met Muhammad, who had taken three of his children to live with him on Antigua after losing a custody battle with his second wife in Tacoma.

James initially told Border Patrol and immigration agents she and Malvo were smuggled into the United States aboard a cargo ship.

Reports following the arrest of Malvo and Muhammad, however, indicate she bought false identification papers from Muhammad and entered the country in late 2000 while her son remained in Antigua with Muhammad.

Malvo came to the United States two months later, bearing a passport that identified him as Muhammad's son, according to Antiguan officials.

He joined his mother in Fort Myers, Fla., but ran away in October 2001 to join Muhammad in Bellingham, where they lived at a homeless shelter as father and son.

In December, James asked Bellingham police to help her get her son back. During the investigation, police said Malvo's comments indicated he and his mother were in the country illegally and officers summoned the Border Patrol, which arrested the mother and son and then released them on $1,500 bail.

Meanwhile, the last of three survivors of the Washington-area sniper attacks has been discharged from a hospital after undergoing five operations.

The 37-year-old man, identified only as being from Florida, was shot once in the abdomen on Oct. 19 as he and his wife left a steakhouse in suburban Ashland.

Pam Lepley, spokeswoman for Virginia Commonwealth University-Medical College of Virginia Hospitals, said Wednesday that the man had left the hospital but wouldn't say when. She said his condition was "stable and improving."

Hospital officials have said the man shot outside the restaurant lost his spleen, part of his pancreas and two-thirds of his stomach, and faced a long recovery and rehabilitation.

Another survivor, a 13-year-old boy who was critically wounded Oct. 7 when he was shot outside a school in Bowie, Md., was released from a hospital last week. The third survivor, a 43-year-old woman shot outside a craft store in Fredericksburg, Va., was hospitalized for less than a week after the Oct. 4 shooting.

On Tuesday, a judge rejected a request from lawyers for sniper suspect John Lee Malvo to hire a psychiatrist to determine whether the 17-year-old should seek an insanity defense.

But the judge on Tuesday said the request was premature. Malvo would likely be entitled to such experts when the case moves to trial, she said.

Federal authorities did not release details of allegations against Manroe, who was arrested in Bridgeport last week.