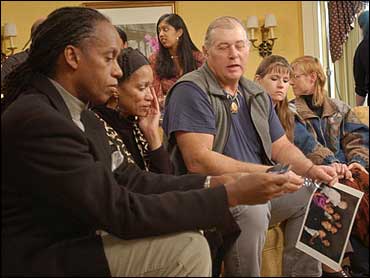 The evidence is still being gathered in the sniper case, including a Clinton, Md., shooting being checked to see if it is linked to the sniper spree that killed 10 people and seriously wounded three others last month.

The Washington Post says U.S. Attorney General John Ashcroft could decide as early as this week which of the many prosecutors who have filed charges against John Allen Mohammad, 41, and John Lee Malvo, 17, will be the first to bring them to trial.

Both suspects have court hearings this week - Malvo today in Baltimore, to determine whether he should be detained on federal juvenile charges, and Mohammad tomorrow, in Greenbelt, Md. His court date is also a detention hearing, at which prosecutors must prove that Mohammad is a defendant who is at risk to flee the area or one who poses a danger to the community.

In addition to the Maryland, Virginia and D.C. shootings originally considered to comprise the sniper spree, authorities also have linked Mohammad and Malvo to two killings in Alabama and Louisiana and another shooting in Silver Spring, Md., in September.

In Clinton, Md., a restaurant worker who was shot six times at close range on Sept. 5, at the end of evening, is waiting to hear from police on whether evidence in his case shows a link to the sniper shootings.

Paul LaRuffa, 55, survived the shooting and was able to go back to work after two weeks in the hospital. He'd like to know now if the Sony laptop found in Muhammad's car is the same one that was stolen from the restaurant, along with $3,000, on the night he was shot.

"I wish somebody would tell me 'Yes, it's yours, no, it's not yours,' and that's what's frustrating about it," said LaRuffa, adding that he was shot with a .22 caliber weapon.

Police found a .22-caliber handgun near the scene of a Sept. 21 shooting at a Montgomery, Ala., liquor store, where a store clerk was killed and another person was wounded.

Clinton also happens to be the town where one of Muhammad's ex-wives lives; police have reportedly been investigating the theory that she may have been marked as a future victim of the sniper.

As detectives work to pull together all the evidence in the case, and prosecutors work to determine exactly what can be done with it, the families of the sniper victims are left with only pictures, memories and questions.

Nine relatives of four people killed in the sniper spree gathered at a Washington, D.C., area hotel Saturday, to meet for the first time and console each other.

"My perception is we're almost sharing the grief," said Marion Lewis of Idaho, who lost his daughter, Lori Ann Lewis-Rivera. "Spreading the weight of it among all of our shoulders helps lighten the load a little bit."

Lewis' 25-year-old daughter was killed as she vacuumed her van at a Kensington, Md., gas station.

Jocelyn Bridges, a mother of six from Philadelphia, had never met Lewis, but she cried when she saw him.

Her husband, Kenneth, 53, was gunned down as he gassed up his car in Fredericksburg, Va.

As the families introduced themselves, they hugged and offered condolences. Gathering in small circles, they skipped the small talk of new acquaintances, instead speaking quietly of God and faith and how they are getting through every day.

Lewis recalled hearing the news of another person killed, then another, for 19 days after his daughter died.

Each time, he said, "It all floods back."

Others watched and listened in silence. Lewis-Rivera's mother, Jo, didn't speak as her husband answered questions about their daughter, who left behind a husband and 2-year-old daughter.

The Lewises' only other child, Charity Randall, 30, said she's been comforting her parents as she tries to make sense of her sister's death.

When conversation turned to the suspects, several said they had struggled to answer one question: Why?

"My biggest question was what motivated them to do this," said Larry Meyers Sr., whose brother Dean Meyers, 53, was gunned down Oct. 9 at a gas station in Manassas, Va. "I'd just like to unlock the box to see what went into making, not one, but two individuals do this."

The family members brushed off questions about mistakes police might have made in not answering the alleged snipers' calls to tip lines and stopping Muhammad's car during the spree but not questioning him.

"At this point, there's no reason to assign any blame," Lewis said.

Several also said they are not in favor of executing the suspects even if they are convicted.

Andrea Walekar's father, taxi driver Prem Kumar Walekar, 54, was killed Oct. 3 at gas station in Rockville, Md. "God is the only one who can judge anybody," she said.