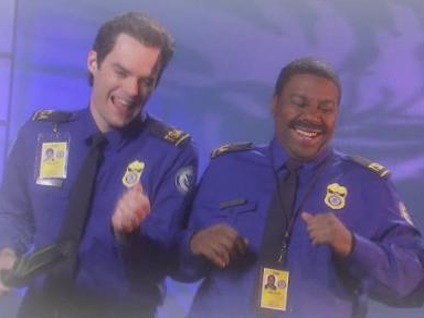 NBC's "Saturday Night Live" added its voice this weekend to the chorus of commentary, criticism, and mockery regarding controversial new airport security measures put in place by the Transportation Security Administration.

SNL's effort? A faux "Message from the TSA" sketch - wherein the new procedures are advertised as a way for lonely travelers to "get contact in certain special places."

(Watch the sketch at left.)

"Feeling lonely this holiday season?" purrs a scantily-clad Kristen Wiig, speaking to what appears to be a late-night-cable-grade soft focus lens.

"Do you want to feel contact in certain special places?" continues Nasim Pedrad.

"Then why not go through security at an airport?" chimes in Keenan Thompson, dressed (less scantily) as a TSA agent.

"TSA agents are ready and standing by to give you a little something extra to feel thankful about this holiday season," adds Bill Hader.

The sketch plays off criticism of the TSA for the newly-implemented use of fully body scanners and "enhanced" pat-downs which some say are too personally invasive.

Over the weekend, a YouTube Clip entitled "Young Boy strip searched by TSA," which shows a young boy going through part of a pat-down procedure, went viral, adding fuel to the fire and provoking yet more fear among Americans' as to the reach of the new regulations.

On CBS's "Face the Nation" on Sunday, Secretary of State Hillary Clinton responded to the outrage, saying that "I understand how difficult it is, and how offensive it must be for the people who are going through it." Clinton added that it is important to strike the right balance between maintaining vigilant security precautions and protecting the interests of passengers.

In a statement yesterday, John Pistole, administrator of the TSA, said the regulations would be "adapted as conditions warrant," in order to make them "as minimally invasive as possible, while still providing the security that the American people want and deserve."

But in the meantime, the SNL-coined TSA slogan lingers: "The TSA - it's our business to touch yours."