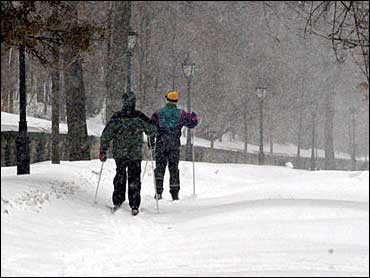 Michael Jordan got the day off on his 40th birthday, and Wake Forest missed one chance to solidify its hold on first place in the Atlantic Coast Conference as a blizzard forced the postponement of dozens of sports events on the East Coast.

Jordan expected to spend his birthday playing for the Washington Wizards against the Toronto Raptors on Monday afternoon. But the NBA rescheduled the game for March 4 in the wake of a storm that pelted the metropolitan Washington area with well over 2 feet of snow.

It was the first of two games scheduled for the MCI Center on Monday that was called off. No. 7 Pittsburgh and Georgetown were to meet in a Big East game; no makeup date was announced.

The storm left windblown drifts of up to four feet and caused at least 12 deaths. Flakes piled up at a rate of up to 4 inches an hour in parts of Maryland.

The snow also caused the postponement of the ACC showdown between Wake Forest and Maryland. The game was originally scheduled for Sunday night and was pushed back to Monday afternoon. Officials said it would be played despite the rough conditions.

And while it didn't snow in Florida, the Daytona 500 still got hit by bad weather, with Michael Waltrip winning the rain-shortened race.

The afternoon start to stock car racing's premier event was moved up by about 20 minutes because of the forecast of rain. The heavy rain that struck Daytona was part of a weather system that brought snow to much of the East Coast.

The race was halted after 63 laps, then restarted 68 minutes later when the track was dried. The race was delayed a second time with drivers about to complete the 110th lap of a 200-lap race, and Waltrip was declared the winner after an hour-long wait.

Knowing that snow was in the forecast, Wake Forest arrived in College Park on Friday. But officials called off the game Sunday because of concerns about the safety of fans, game officials and arena employees.

"It would be next to impossible to appropriately staff the game today, both inside and outside the arena," Maryland athletic director Debbie Yow said Sunday.

ACC rules dictate that a game should be played if both teams and the officials can make it to the arena, but an exception was made.

At Laurel Park in Maryland, snow forced the postponement of horse racing on Saturday, Sunday and Monday. Maryland officials were forced to shuffle the two biggest races of the winter meet, the Barbara Fritchie Handicap and the General George Handicap. Both $200,000 events were moved to Feb. 22.

The racing card at Philadelphia Park was canceled Sunday by snow, and Aqueduct in New York abandoned Sunday's card after one race and postponed Monday racing in anticipation of heavy snow.

Philadelphia Park canceled live racing only on Sunday. At Aqueduct, racing was halted Sunday after temperatures dipped to 13 degrees. The $75,000 Rare Treat, scheduled for Monday, will be run Wednesday.

In New Jersey, the Meadowlands and Monmouth Park canceled their Monday simulcasting cards.
By David Ginsburg