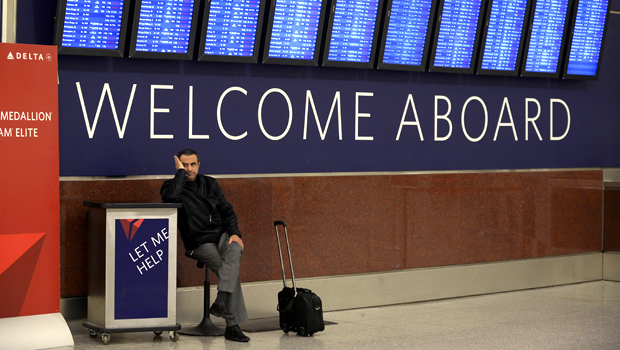 NEW YORK -- The relentless snow and ice storms this winter have led to the highest number of flight cancellations in more than 25 years, according to an analysis by The Associated Press.

U.S. airlines have canceled more than 75,000 domestic flights since Dec. 1, including roughly 14,000 this week. That's 5.5 percent of the 1.35 million flights scheduled during that period, according to AP calculations based on information provided by flight tracking site FlightAware.

It's the highest total number and highest percent of cancellations since at least the winter of 1987-1988, when the Department of Transportation first started collecting cancellation data.

Mother Nature isn't entirely to blame. A mix of cost-cutting measures and new government regulations has made airlines more likely to cancel flights and leave fliers scrambling to get to their destination.

On Thursday, more than 70 percent of flights were canceled in Baltimore, Philadelphia, Washington D.C. and Charlotte, N.C., thanks to a winter storm that paralyzed most air traffic along the East Coast. Ice storms this winter have caused major headaches in typically warm cities like Atlanta, Dallas and Houston.

"This year is off to a brutal start for airlines and travelers," says FlightAware CEO Daniel Baker. "Not only is each storm causing tens of thousands of cancellations, but there's been a lot of them."

Making things worse, airlines have been cutting unprofitable flights and packing more passengers into planes. That's been great for their bottom line but has created a nightmare for passengers whose flights are canceled due to a storm. Other planes are too full to easily accommodate the stranded travelers. Many must wait days to secure a seat on another flight.

Carol Cummings, 23, was trying to fly Thursday on United Airlines from the Washington, D.C., area to Los Angeles to visit a high school friend for the long Presidents Day weekend. The flight was canceled and Cummings was automatically rebooked for a flight on Monday - the day she was supposed to return home. After 150 minutes on hold, United offered to move the trip to another weekend - for an extra $150 - or to refund her ticket.

"I am annoyed and surprised at the lack of customer concern I experienced," she says." Cummings is waiting for her refund.

(Official statistics won't be released for another two months but FlightAware's figures have been historically in line with the government's data.)

"As an industry, you are prepared for bad weather but I'm not sure if you are ready for this many events back to back," says Savanthi Syth, an airline analyst with Raymond James.

Airlines are quicker to cancel flights these days, sometimes a day in advance of a storm. It's rarer to see planes parked at the edge of runways for hours, hoping for a break in the weather, or passengers sleeping on airport cots and cobbling together meals from vending machines. The shift in strategy came in response to new government regulations, improvements to overall operations and because canceling quickly reduces expenses.

In May 2010, a new DOT rule took effect prohibiting airlines from keeping passengers on the tarmac for three hours or more. So, airlines now choose to cancel blocks of flights to avoid potential fines of up to $27,500 per passenger or $4.1 million for a typical plane holding 150 fliers.

Additionally, the government implemented a new rule at the start of January, increasing the amount of rest pilots need. That's made it harder to operate an irregular schedule, such as those seen after a storm. In order to have enough well-rested pilots, airlines cancel more flights.

"This is another behavior being forced upon them by government regulations," says Andrew Davis, an airline analyst at T. Rowe Price.

Not all of the cancelations are tied to regulations. Airlines have learned in recent years that while a large number of early cancelations might cause short-term pain, it helps them better reset after the weather clears.

Reservation systems now automatically rebook passengers on new flights - though not always the flight they want - and send a notification by email, phone or text message.

Keeping planes at airports outside of the storm's path can protect equipment and thereby get flight schedules back to normal quickly after a storm passes and airports reopen. It also allows airlines to let gate agents, baggage handlers and flight crews stay home, too - keeping them fresh once they're needed again.

There are also financial considerations. A plane circling above an airport hoping to land, or even one waiting on a taxiway, burns a lot of fuel. A decade ago, when jet fuel was $1.15 a gallon, that might not have been a major concern. Today, airlines are paying $3.03 a gallon and fuel has become their largest single cost, eclipsing salaries.

Flying during a winter storm also requires deicing, a process that takes time and costs the airlines money.

But the sting isn't as bad as you might think.

Jim Corridore, an airline analyst with S&P Capital IQ, notes that the United also saved millions in fuel and salaries by not having to fly the canceled flights. And some level of storm-related expenses is already built into airline budgets.

"We're not going to have this type of winter, every winter," Corridore says.