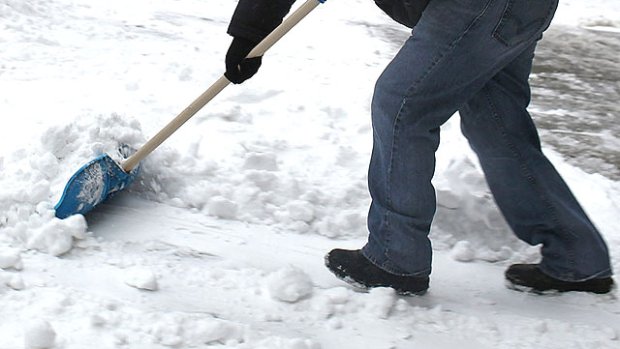 Snowstorms may leave more than a big mess in their wake: New research shows a sharp spike in hospital admissions for heart trouble two days after these weather events.

Hospital admissions for heart attacks, chest pain and stroke actually fell on the day of the storm, the study found, possibly because people can’t get out for care. But they rebounded again within the next 48 hours.

The reasons for the trends aren’t clear, the researchers said.

“We’re not talking to people and asking them, ‘Why did you go to the hospital on this day and not that day?’ “ said study lead author Jennifer Bobb.

Bobb was a postdoctoral researcher at the Harvard T.H. Chan School of Public Health when she worked on the study. She’s now an assistant investigator at the Group Health Research Institute in Seattle.

Or, she continued, it could be that people stay inside during the day of a major snowstorm. “You might not shovel that day, but you might shovel the next few days,” she said.

The study authors believe their analysis is the first to examine hospital admissions over the course of several days after low, moderate and high snowfalls.

Cardiologist Dr. Ellen Keeley, who wasn’t involved in the study, said the results are consistent with other smaller, single-center studies.

It “highlights the importance of the real association between snowstorms and cardiac events,” Keeley said. She’s an associate professor of cardiovascular medicine at the University of Virginia School of Medicine.

The study covered a period of time during which Boston was battered by some of its largest-ever winter storms, inspiring researchers to take a closer look at the health effects.

Information was taken from more than 433,000 adults hospitalized at Boston’s four largest hospitals during the months of November through April of 2010 to 2015. In addition to cardiac events, the research team studied cold weather-related conditions such as frostbite, falls and injuries occurring on the day of a snowfall and six days afterward.

The analysis encompassed minor events involving a dusting to 5 inches of snow, moderate snowfalls of 5.1 to 10 inches and major storms dropping more than 10 inches.

Cold weather-related admissions increased by 4 percent on high snowfall days compared to days with no snowfall, and those admissions remained high for five days afterward, the study found.

Falls increased by 18 percent, on average, in the six days after a moderate snowfall.

Bobb said the results suggest that even moderate snowfall days may pose a health risk.

The study didn’t include emergency department or clinic visits that didn’t result in admission. And it only reflects admissions in one major urban area, so the results may not hold up in more suburban or rural areas.

Although researchers don’t know what prompts heart-related events during snowstorms, they suspect snow shoveling could be a factor.

Heart patients shouldn’t shovel snow, and they need to prepare ahead of the storm, Keeley said.

If they take prescription medications, they need to “make sure that they have plenty on hand before a storm hits so that they do not run out during a time when it would be very difficult to refill them,” Keeley said.

“Individuals who are not usually physically active also should not shovel snow since it may bring on symptoms due to undiagnosed coronary artery disease,” she added.

Breathing in cold air can exacerbate asthma and chronic obstructive pulmonary disease, Keeley said. It can also lead to “coronary vasospasm,” a temporary narrowing of one of the coronary arteries, which can cause chest pain and dangerous irregular heart rhythms.

“So staying indoors is the safest option especially for high-risk individuals,” she said.

The study was published online Jan. 30 in the American Journal of Epidemiology.