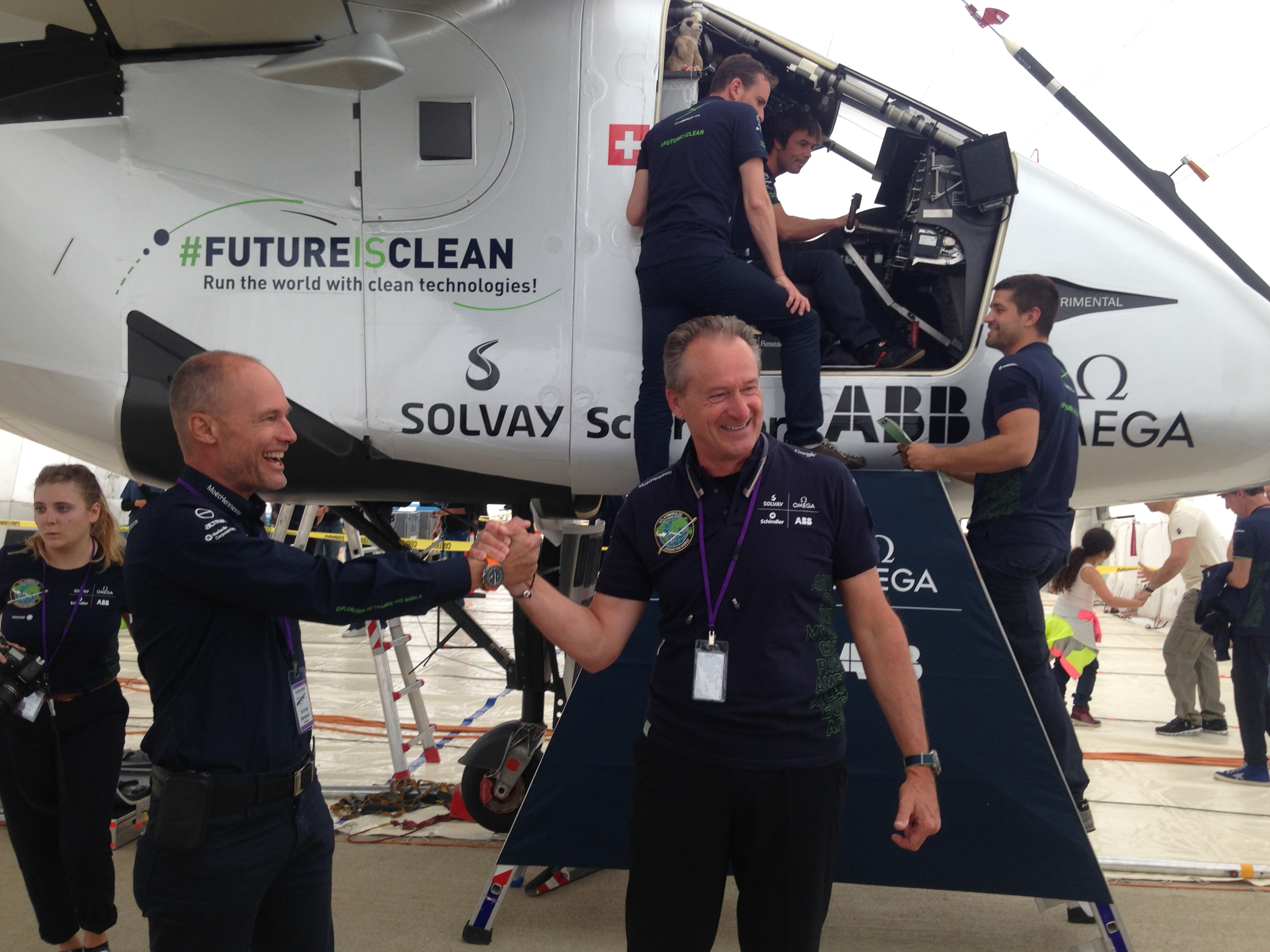 MOUNTAIN VIEW, Calif. --The two Swiss pilots taking turns to flya solar-powered airplane around the world said Sunday the endeavor is not only a demonstration of the importance of renewable energy but also of the many challenges the human body can endure.

Pilot Bertrand Piccard completed a risky, three-day flight across a great expanse of the Pacific Ocean while sleeping only 20 minutes at a time inside the plane's tiny cockpit with no heat or air conditioning and while having to keep constant contact with the Europe-based control center.

"You have interviews, navigation control, communications with the control center in Monaco. You have health checks, a lot of health checks," Piccard said. "It's very active, there are a lot of things to do, but you can nevertheless enjoy it."

Piccard said he uses self-hypnosis to keep his energy up and puts heating pads inside his shoes and gloves for warmth. He said he has no complaints about the ready-made meals he can warm up with a special heat packet and that can include risotto, chicken curry and potatoes.

On Sunday, special guests, many of them with Google, which is sponsoring the project, had a first look at the plane inside a huge white tent at Moffett Airfield. The guests also mingled and took photos with Piccard and fellow Swiss pilot Andre Borschberg.

Piccard landed the Solar Impulse 2 in Mountain View, in the Silicon Valley south of San Francisco, on Saturday night following a 62-hour, nonstop solo flight from Hawaii without fuel.

The landing came hours after Piccard made a fly-by over the Golden Gate Bridge as spectators below watched the narrow aircraft with extra wide wings.

Piccard and Andre Borschberg have been taking turns flying the plane on an around-the-world trip since taking off from Abu Dhabi, the capital of the United Arab Emirates, in March 2015. It made stops in Oman, Myanmar, China, Japan and Hawaii.

The trans-Pacific legs were the riskiest part of the plane's travels because of the lack of emergency landing sites.

"We have demonstrated it is feasible to fly many days, many nights, that the technology works" said Borschberg, 63, who piloted the plane a five-day trip from Japan to Hawaii and who kept himself alert by doing yoga poses and meditation.

The project has helped to show that "as a human being you can be sufficiently sustainable to be able to fly at least five days in such a plane."

The aircraft faced a few bumps along the way.

The Solar Impulse 2 landed in Hawaii in July and was forced to stay in the islands after the plane's battery system sustained heat damage on its trip from Japan. The team was delayed in Asia, too. When first attempting to fly from Nanjing, China, to Hawaii, the crew had to divert to Japan because of unfavorable weather and a damaged wing.

A month later, with better weather conditions, the plane left Nagoya in central Japan for Hawaii.

The plane's ideal flight speed is about 28 mph, though that can double during the day when the sun's rays are strongest. The carbon-fiber aircraft weighs over 5,000 pounds, about as much as a midsize truck.

The plane's wings, which stretch wider than those of a Boeing 747, are equipped with 17,000 solar cells that power propellers and charge batteries. The plane runs on stored energy at night.

Solar Impulse 2 will make three more stops in the United States before crossing the Atlantic Ocean to Europe or northern Africa, according to the website documenting the journey.

Borschberg said the plane will again take flight this week, and the next stop could be Phoenix. But that will depend on weather.

The project, which is estimated to cost more than $100 million, began in 2002 to highlight the importance of renewable energy and the spirit of innovation.

"I think innovation and pioneering must continue," Piccard said. "It must continue for better quality of life, for clean technologies, for renewable energy. This is where the pioneers can really express themselves and be successful."

Solar-powered air travel is not yet commercially practical, given the slow travel time, weather and weight constraints of the aircraft.

"Maybe it will be boring in 20 years when all the airplanes will be electric and people will say 'Oh it's routine.' But now, today, an airplane that is electric, with electric engines, that produces its own energy with the sun, it can never be boring," Piccard said.