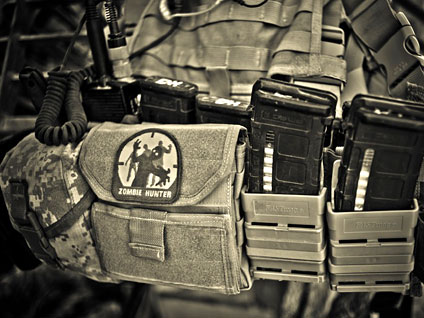 A peek inside any airport bookstore will tell you that Americans want to read about vampires this summer. Vampire love stories, vampire hunting manuals, vampire comedies, classic novels rewritten to include vampires -- apparently anything sporting fangs and makeup will sell.

As usual, the military is developing a similar obsession, but not vampires. With the Army, it's zombies.

Dog-eared copies of Max Brooks' "World War Z," a first person account of the Great Zombie War, and his definitive undead-fighting manual, "The Zombie Survival Guide," are found wherever soldiers relax and oil their weapons.

One soldier showed me a huge, razor-sharp Nepalese Ghurka knife that weighed about seven pounds -- a lot of extra weight to carry on patrol. He explained that because killing zombies required a decapitating or skull-crushing blow, there was simply no better tool for fighting the undead in close quarters.

As uniforms and body armor become more and more covered in Velcro, Zombie Hunter patches have become hot sellers for tactical suppliers. At the German Post Exchange at Kandahar Airfield, that patch is continually sold out.

The problems of war against the undead have parallels with the problems soldiers face daily in Afghanistan. A zombie needs no food, water or equipment and pursues the living with implacable determination. For soldiers trying to defend a million dollar vehicle against a malnourished, illiterate man wielding a $40 roadside bomb, the similarity must be chilling.

LATEST FROM GLOBALPOST ON AFGHANISTAN

Afghanistan: In search of the true civilian toll