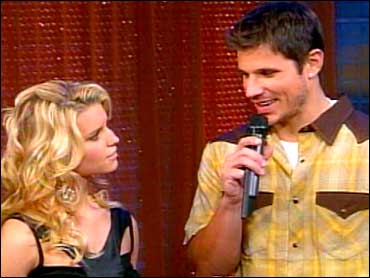 Pop sensations Nick Lachey and Jessica Simpson have become one of America's most famous married couples, thanks to the hit reality series, "Newlyweds" on MTV.

The show chronicles the ups and downs of their first year of marriage.

Lachey tells The Early Show co-anchor Rene Syler, "We went in not knowing how it was going to be. We thought if ever there was a good time to do a TV show and have them be in our house, might as well be now, since you don't know any different. It has been a lot less of an intrusion than I think we expected."

Actually, the couple says, it has been a good experience. Simpson explains, "We were actually excited to do it and we were excited to share our lives with people and actually show them that we are a normal couple. It's not just about the red carpet and being a celebrity, that we are normal people, so that was our number one reason to do it."

Even if that means being caught saying the wrong things, like confusing the Chicken of the Sea tuna fish brand for actual chicken. Simpson says they are "ditsy comments - it happens to everybody. Mine are just on TV."

About his wife, Lachey notes, "She has a great sense of humor about the whole thing and people sometimes are, 'Don't you get mad that people talk about your wife? That people call your wife ditzy?' She has a great perspective on it, how can I be mad?"

Simpson admits it is embarrassing but says, "It's fun to laugh at myself. I'm a confident person and I am confident in who I am and Nick and I sit back and watch the show together and laugh."

The show has just been renewed for a second season. If that wasn't enough to keep them busy, each has just released a new CD. Simpson's third album is called "In This Skin" and Lachey's first project without the group 98 Degrees is called "SoulO."

Lachey says he misses recording with the group. "I think it's special to get in there as a group and do it. But it's been cool to step out there on my own and do some things that maybe the group wouldn't have been able to do," he says.

Lachey says he sees this step he has taken as a challenge, even though it is a scary move. He says, "I always look forward to taking those challenges head on."

As for Simpson, the album she has done is all her own. She says, "This album for me is an important album just because I wrote it and I never got that opportunity before. So all of the material on it is definitely straight from my heart. It's very positive, very organic - just more natural and no choreography and no head mics and that kind of stuff."

Simpson sang "With You" and Lachey sang "This I Swear" on The Early Show.

Some Facts About Jessica Simpson