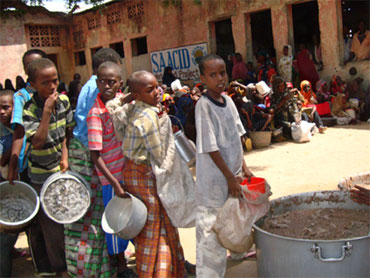 The U.N. food agency is stopping aid distribution to about 1 million people in southern Somalia because of attacks against staff and demands by armed groups that aid groups remove women from their teams, the agency said Tuesday.

The World Food Program is moving staff and supplies to northern and central Somalia from six areas in the south that are largely controlled by the al-Shabab Islamist group, said Emilia Casella, a WFP spokeswoman. The U.S. State Department says al-Shabab has links to al-Qaeda.

"Up to a million people that have been dependent on food assistance in southern Somalia face a situation that is particularly dire," Casella told reporters in Geneva.

At least four of WFP's staff have been killed over the past 18 months, and militants threatened and looted three of its offices in the south, Casella told The Associated Press.

Armed groups have also increasingly been demanding that the World Food Program and other aid groups remove women from their staff and pay tens of thousands of dollars in protection money to guarantee the aid workers' security, she said.

The agency had tried to resolve the demands of armed groups through meetings with village elders, but was unable to win the necessary guarantees for the security of its staff and protection of its humanitarian work, Casella said.

"We need concrete guarantees from the leadership" of the armed groups, she said.

The World Food Program is now preparing for a mass exodus of hungry Somalis from the south to other parts of Somalia and to neighboring countries, she said.

The agency supplies aid to some 3 million people in the war-torn country, which is also struggling with drought and produces only a third of the food it needs every year.