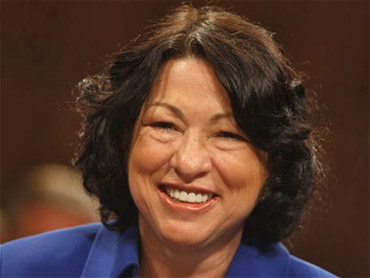 (AP Photo/Ron Edmonds)
And so it comes to pass at the United States Supreme Court this week that the constitutionality of a movie about a woman who could easily be a Justice (and who one day may be) will be judged by a woman who actually is.

Even though we are weeks away from the first Monday in October, the Court meets this Wednesday, in a rare September session, to evaluate the constitutionality of important campaign finance laws. The case is a big one, but the question at its core is simple: Does the First Amendment distinguish between campaign contributions from individuals and those of corporations?

Most legal observers believe the Court's conservative majority will answer that question "No," invalidate the federal statutory scheme involved, and thus unleash into elections a barely-regulated flood of corporate money (and maybe union money, too, for that matter).

In her very first public appearance at work, Justice Sotomayor thus may help illustrate how little the Court moved this past year, in the trade-off between her and Justice David Souter, and how much it moved in 2006, when conservative Justice Samuel Alito took the place of less conservative Justice Sandra Day O'Connor. The latter, Lady Justice, was the fifth and deciding vote (and co-author of the majority ruling) in McConnell v. FEC, a 2003 Court ruling which upheld corporate restrictions on contributions.

This means that Justice Samuel Alito is likely to be the deciding vote in the upcoming "Hillary" case, titled Citizens United v. FEC. There are a number of court watchers who believe Justice Alito's apparent eagerness to scrap-heap the McCain-Feingold Act (and to overrule the McConnell precedent) is the reason the Court took the rare step of enlarging the range of issues it now seeks to resolve through this second round of oral argument in the case. Justice Sotomayor? She'll almost certainly be the fourth vote in dissent that Justice Souter would have been had he stayed another year or so.

Whatever occurs, Wednesday will surely be a memorable day for the newest Justice, who will don her robes for the first time as Queen of the Hill.

Will she ask a lot of questions like she did when she was a lower-court judge? Or will she pull a Justice Thomas and remain mute? We'll see. It's the first day of the rest of her life and she's starting out with one of the biggest cases the Court will hear all term.