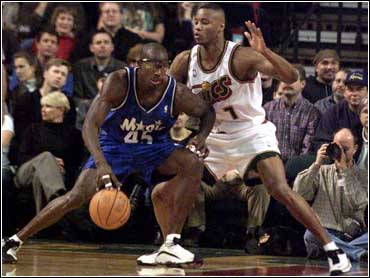 Just three years out of high school, Rashard Lewis is set for life. And if he has his way, his life in the NBA will be centered in Seattle until he retires.

"It was a pretty easy decision," Lewis said at a news conference Wednesday to announce his re-signing. "I can see myself playing in Seattle my whole career."

The emerging star signed a three-year contract worth $13.3 million, with a player option after the 2001-02 season.

Seattle signed Lewis out of his Houston high school after selecting him with the 32nd pick overall in the 1998 draft. He turns 21 on Tuesday.

"There's really no limit on what Rashard's going to be able to do in this league," coach Paul Westphal said. "As he played every game, his minutes grew because he earned more minutes.

"I don't think he's come anywhere near reaching his potential."

The Sonics are looking for Lewis and 10-year veteran Gary Payton to be the nucleus of the team. Vin Baker had a disappointing season, but Westphal said he's been making progress in workouts.

Lewis said he was disappointed when he went in the second round
- not the first - of the 1998 draft, but feels loyal to Seattle for giving him a chance to play.

In the first round of the playoffs against Utah, he started all five games and averaged 15.4 points.

Lewis said Toronto recruited him heavily, although he never seriously considered signing with them.

"He wants to be comfortable. He hates to start all over again," said his twin sister, Krissy, who attended the news conference along with their mother and step-father and a friend from high school.

After signing the deal Tuesday, Lewis headed to Safeco Field, where he threw out the first pitch before the Mariners-Red Sox game. Lewis stayed for eight of the game's 19 innings.