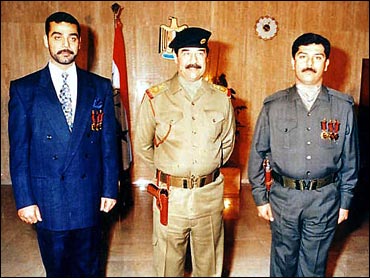 Saddam Hussein's sons, Qusai and Odai, two of the most feared and powerful members of their father's regime, were killed Tuesday when U.S. forces surrounded and then stormed a villa in the northern Iraqi town of Mosul.

Qusai Hussein, Saddam's younger son and heir apparent, held wide-ranging powers over the nation's ruthless security apparatus. The 37-year-old is No. 2 on the U.S. list of the 55 most wanted former Iraqi leaders.

Odai Hussein, Saddam's murderous and erratic oldest son of Saddam Hussein, controlled propaganda in Iraq and allegedly oversaw the torture of athletes who failed to perform. The 39-year-old is No. 3 on the list of most-wanted Iraqis.

Both brothers are also on a U.S. list of former regime members who could be tried for war crimes.

Quiet, handsome and every bit as brutal as Saddam, Qusai headed Iraq's intelligence and security services, his father's personal security force and the Republican Guard, an elite force of 80,000 soldiers responsible for defending Baghdad.

He stayed out of the public eye and led a substantially more subdued private life than his older brother Odai, who collected luxury cars by the hundreds and had a habit of ordering his guards to snatch young women off the street in order to rape them. Iraqis nicknamed Qusai "The Snake" for his bloodthirsty but low-profile manner.

Qusai was far more trusted by his father and appeared to be his heir before the regime crumbled. In televised meetings with top security and military men, Qusai was seated next to his father, wearing well-tailored suits and dutifully noting his father's every word.

An exiled dissident told The Associated Press that only Qusai and Saddam's private secretary, Abid Hamid Mahmud al-Tikriti, who was captured in June, were kept informed of Saddam's whereabouts. Odai was thought to be too reckless to be trusted with such information.

Experts do not believe Qusai played a significant role in the Gulf War of 1991. But he was a leading figure of terror in the conflict's aftermath, using mass executions and torture to crush the Shiite Muslim uprising after that war.

Qusai also helped engineer the destruction of the southern marshes in the 1990s, an action aimed at Shiite "Marsh Arabs" living there.

The marshes — roughly 3,200 square miles — had provided the necessities of life for tens of thousands of marsh dwellers for at least 1,000 years. The area was destroyed through a large-scale water diversion project intended to remove the ability of insurgents to hide there.

Qusai also oversaw Iraq's notorious detention centers and is believed to have initiated "prison cleansing" — a means of relieving severe overcrowding in jails with arbitrary killings.

Qusai was made chief of the army branch for the ruling Baath party in 2000, meaning virtually all the army's movements were under his supervision. Just before this year's war began, he was put in charge of defending the nation's capital and heartland.

Qusai was spared any real combat during the 1980-88 Iran-Iraq war, although state television showed him conferring with commanders. He did not do any of the compulsory military service required of most Iraqi men.

Qusai wed the daughter of a respected senior military commander. The couple, who later separated, had two daughters.

Odai, the eldest of Saddam's five children, was head of the paramilitary Fedayeen Saddam paramilitary unit, where he helped his father eliminate opponents and exert iron-fisted control over Iraq's 25 million people. Odai was elected to parliament in 1999 with a reported 99 percent of the vote, but he rarely attended parliament sessions.

Iraqi exiles say Odai murdered at will and tortured with zeal, and routinely ordered his guards to snatch young women off the street so he could rape them. The London-based human-rights group Indict said Odai ordered prisoners to be dropped into acid baths as punishment.

The Caligula-like Odai seemed proud of his reputation and called himself Abu Sarhan, an Arabic term for "wolf."

But his tendency toward erratic brutality even exasperated Saddam, who temporarily banished Odai to Switzerland after the younger Hussein killed one of his father's favorite bodyguards in 1988.

Odai had once been a strong candidate to succeed his father, but he was badly injured in 1996 in an assassination attempt by gunmen who opened fire as he drove his red Porsche through Baghdad. The attack left Odai with a bullet in his spine that forced him to walk with a cane. Younger brother Qusai was instead groomed to succeed Saddam, worsening already uneasy relations between the two brothers.

Odai owned Iraq's most widely circulated daily newspaper, Babil, which he used as a platform for regime propaganda, publishing signed editorials full of bombastic rhetoric. He also oversaw Al-Zawra, a weekly published by the journalists union that he headed, and owned the popular Youth TV.

Much of Odai's notoriety abroad stemmed from his position as head of the National Iraqi Olympic Committee, which was accused of torturing and jailing athletes.

Army officers also were fair game for Odai's outbursts of violence. In 1983, Odai reportedly bashed an army officer unconscious when the man refused to allow Odai to dance with his wife. The officer later died. Odai also shot an army officer who did not salute him.

Things were hardly better on the family front, where relations between Odai and his uncles were especially bad. Odai reportedly divorced the daughter of one uncle, Barzan Ibrahim Hasan, in 1995 after she complained of being beaten. Odai shot and wounded another uncle, Watban Ibrahim Hasan. Both uncles were captured after the war and are in the custody of U.S. coalition forces.

While millions of Iraqis suffered dire poverty, Odai lived a life of fast cars, expensive liquor and easy women. When U.S. troops captured his mansion in Baghdad, they found a personal zoo with lions and cheetahs, an underground parking garage for his collection of luxury cars, Cuban cigars with his name on the wrapper, and $1 million in fine wines, liquor — and even heroin.

Odai's obsession with sex was evident everywhere: The house was adorned with paintings of naked women and photographs of prostitutes taken off the Internet, complete with handwritten ratings of each.

There were bags and boxes of pills and medicines everywhere — ginseng sexual fortifiers, heartburn medication, the anti-depressant Prozac — and an Accu-Rite HIV Antibodies Screening Test Kit was in Odai's office.

Nearby was a domed house believed to be the residence of Odai's concubines, a bastion of bad taste with statuettes of couples in foreplay, couches with fluffy pillows and a swimming pool with a bar.