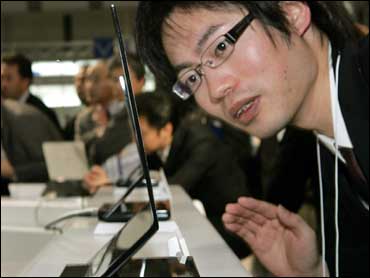 Sony believes it's the first company to launch an OEL TV, she said.

The screens make use of the self-luminescent properties of some organic materials. They use less power than comparable liquid-crystal display screens because they don't need a backlight, and are also much thinner — the screen in Sony's planned 11-inch OEL TV will be 0.12 inches thick.

The move into OEL TVs suggests Sony has learned a lesson from its bitter experience several years ago, when it was caught flat-footed by rivals that took the lead in the LCD TV market.

The company fought back. Last year, it overtook Sharp Corp. and Samsung Electronics Co. to become the world's biggest LCD TV maker by revenue, according to market researcher DisplaySearch.

Sony may now be hoping "to steal a march on rivals in terms of technology and make the new technology its own," said Deutsche Securities analyst Yasuo Nakane.

Sony has not disclosed details on its production plans or pricing for the 11-inch OEL TVs. The company said it will make the OEL panels at a plant operated by ST Liquid Crystal Display Corp., a joint venture it has with Toyota Industries Corp.