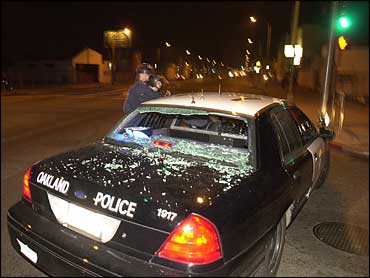 Rowdy crowds set cars on fire, pelted passing vehicles with rocks and bottles and vandalized a fast food restaurant Sunday night in Oakland following the Raiders' loss in the Super Bowl on Sunday.

Police in riot gear responded with rubber bullets and tear gas, and briefly closed some stretches of city streets. At least 23 people were arrested, mostly for public intoxication, police said.

At least two cars were set on fire, and a television news van had its windows broken. One group of young men set debris on fire in the middle of a street and then posed for news photographers. Tear gas wafted through the area, and some witnesses picked up rubber bullets fired by police.

After the Raiders advanced to the Super Bowl last week, crowds set fires, broke windows and threw rocks and bottles. Oakland officials had vowed to prevent a repetition of the violence following the Super Bowl, and hundreds of extra officers were assigned to work Sunday.

The favored Raiders were routed by the Tampa Bay Buccaneers 48-21.

There was lots of emotion in Tampa, too, but of a different kind.

Tampa Bay Buccaneers fans screamed, wept and hugged each other Sunday night as they celebrated their team's 48-21 win over the Oakland Raiders in the Super Bowl.

As the clock wound down on the victory, Tampa resident Jennifer Farrell just wept. She couldn't help herself.

"I've waited so long for this," the 27-year-old Tampa native said. Tears flowed as she stood glued to one of the big-screen TVs in Beef O'Brady's sports bar in south Tampa as fans around her hugged, chanted and high-fived each other.

Bucs fans did indeed wait a long time — 27 seasons to be precise. And their emotions bubbled to the surface as the Bucs put the finishing touches on a walloping of the favored Raiders.

When the trouble broke out in Oakland, huge squads of officers marched through the streets, and authorities closed off some areas of the city.

Some shop owners in the area of last week's violence closed at kickoff time, hoping to avoid trouble.

At Q's Clothing, Nader Qutov, the owner's nephew, said he was closing early, although before the game he also hawked Raiders t-shirts to eager fans.

A celebration is planned in Tampa at the stadium Monday night when the team returns from San Diego. Gates open at 7 p.m., and the team is expected to arrive at about 9 p.m., the city said late Sunday.

Mike Russell, 28, and Randolph York, 22, hugged each other and lit cigars on the sidewalk outside Beef O'Brady's.

"I'm about to cry," Russell said. "This is so wild. I took so much crap growing up."

Kim Long, 31, a Bucs season ticket holder, recalls years ago when people left game tickets on car windshields outside the stadium because they didn't want to go to the games.

"It was due," she said as she celebrated with a large table of friends inside the bar. "It was our time."

Gone are those Creamsicle orange jerseys and winking pirate logo that became symbols of the team's years of futility. Gone are the years of double-digit losses.

"It doesn't get any better than this," said Tim Johnson, 37, just before standing on a chair in the bar and starting a chant of "Chucky," invoking the nickname of Bucs head coach Jon Gruden.

"I've been waiting on this for years," he said, puffing a large cigar.

"It's just sinking in. I love Jon Gruden," said Jack Tannenbaum, who watched the game with 300 others at Timeout Grill & Bar in Seminole. Outside fireworks exploded overhead.

His wife, Laura Tannenbaum, added: "I was sure they'd win. They're now the best of the best. We waited a long time."

All week, fans were lining up outside stores to buy anything with a Bucs logo. Local TV stations anchored their newscasts from San Diego, elementary schools suspended classes for pep rallies and electronics stores had a run on big-screen TVs.

Cindy Hutchinson, 38, of Tampa said she wasn't a serious football fan before Bucs fever took hold the past few weeks. She went out Saturday and bought a Bucs T-shirt.

"There's just a feeling that we're all together," Hutchinson said from a friend's Super Bowl party. "There's a sense of unity."