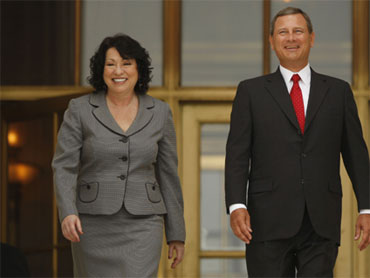 Chief Justice John Roberts administered Sotomayor the oath of office at the event, known as an investiture – the traditional ceremonial welcoming of a new justice. The oath of office was essentially for show, however, as Sotomayor was sworn in back on August 8th.

After receiving the oath, Sotomayor took her seat at the end of the bench, according to seniority.

"We wish you a long and happy career on our common calling," Roberts told the new justice, who wore a white blouse under her judicial robe. 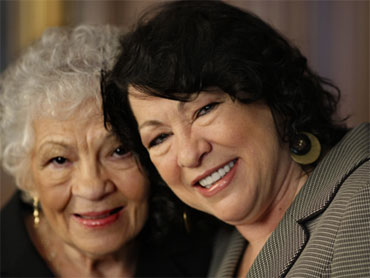 (AP)
The justices begin work tomorrow, and Sotomayor's first case is a doozy: Citizens United v. Federal Election Commission, a case that could result in overturning laws against direct corporate campaign contributions. (Many companies currently indirectly donate to candidates via Political Action Committees funded in part by employees.) The case grew out of a lawsuit involving an anti-Hillary Clinton movie from the period of the 2008 campaign. (Read more>.)

Sotomayor was also joined by her mother (pictured at left with the justice), her brother John, entertainer Ricky Martin, Attorney General Eric Holder, members of Congress, judges and others at the ceremony, according to the Associated Press. Also present was the justice Sotomayor is replacing, David Souter. 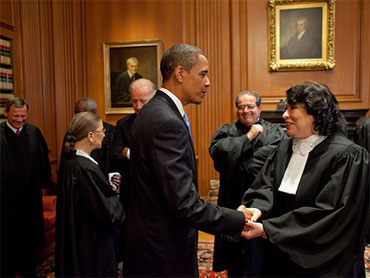 (White House)
Following the ceremony Sotomayor descended the courthouse steps, accompanied by Roberts, to pose for pictures and acknowledge the small group gathered outside.

(At left: The official White House photo of President Obama talking with Sotomayor prior to her investiture ceremony.)