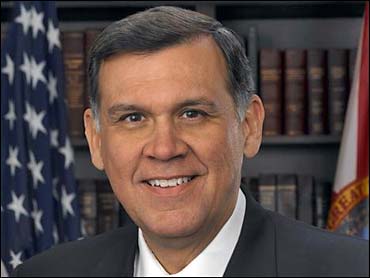 The memo — first reported by ABC News on March 18 and by The Washington Post and The Associated Press two days later — said the fight going on then over removing Schiavo's feeding tube "is a great political issue ... and a tough issue for Democrats."

"This is an important moral issue and the pro-life base will be excited that the Senate is debating this important issue," said the memo, which was described at the time as being circulated among Senate Republicans while legislation was being considered to place the Schiavo case under the jurisdiction of federal courts.

Martinez said in a written statement that he discovered Wednesday that the memo had been written by an aide in his office.

"It is with profound disappointment and regret that I learned today that a senior member of my staff was unilaterally responsible for this document," Martinez said.

He said he accepted the resignation of the staffer who drafted and circulated the memo. "This type of behavior and sentiment will not be tolerated in my office," he said.

Martinez did not identify the aide, but The Washington Post said he was the senator's legal counsel, Brian Darling.

"Until this afternoon, I had never seen it and had no idea a copy of it had ever been in my possession," Martinez said of the document. He had previously denied knowing anything about the memo and condemned its sentiments.

The memo had been disavowed by Senate Majority Leader Bill Frist, R-Tenn., and House Majority Leader Tom DeLay, R-Texas, both primary forces behind Congress passing the bill and sending it to President Bush on March 21.

Democrats had pounced on the document as evidence that Republicans were seeking a political advantage in the fight between Schiavo's husband and her parents over removing her feeding tube 15 years after she incurred severe brain damage that left her incapacitated.

Schiavo, 41, died last Thursday in a Florida hospice, 13 days after the feeding tube was removed. During the interim, federal courts repeatedly rejected what Republicans said was the intent of the bill: to have the tube reinserted and prolong Schiavo's life.

Martinez, in his statement, said Sen. Tom Harkin, D-Iowa, had asked for background information on the bill ordering a federal court to review the Schiavo case.

He said he pulled a one-page document from his coat pocket and handed to Harkin. "Unbeknownst to me ... I had given him a copy of the now infamous memo."

He said Harkin had called him earlier Wednesday to say he believes the memo had been given to him by Martinez. The Florida senator said he then ordered an internal investigation in his office.

Allison Dobson, a spokeswoman for Harkin, said the Iowa Democrat had received the memo from Martinez in the days leading up to passage of the bill.

Martinez said he also had apologized to Sen. Bill Nelson, D-Fla., who is up for re-election in 2006 and was cited in the memo because he had declined to become a sponsor of the bill.