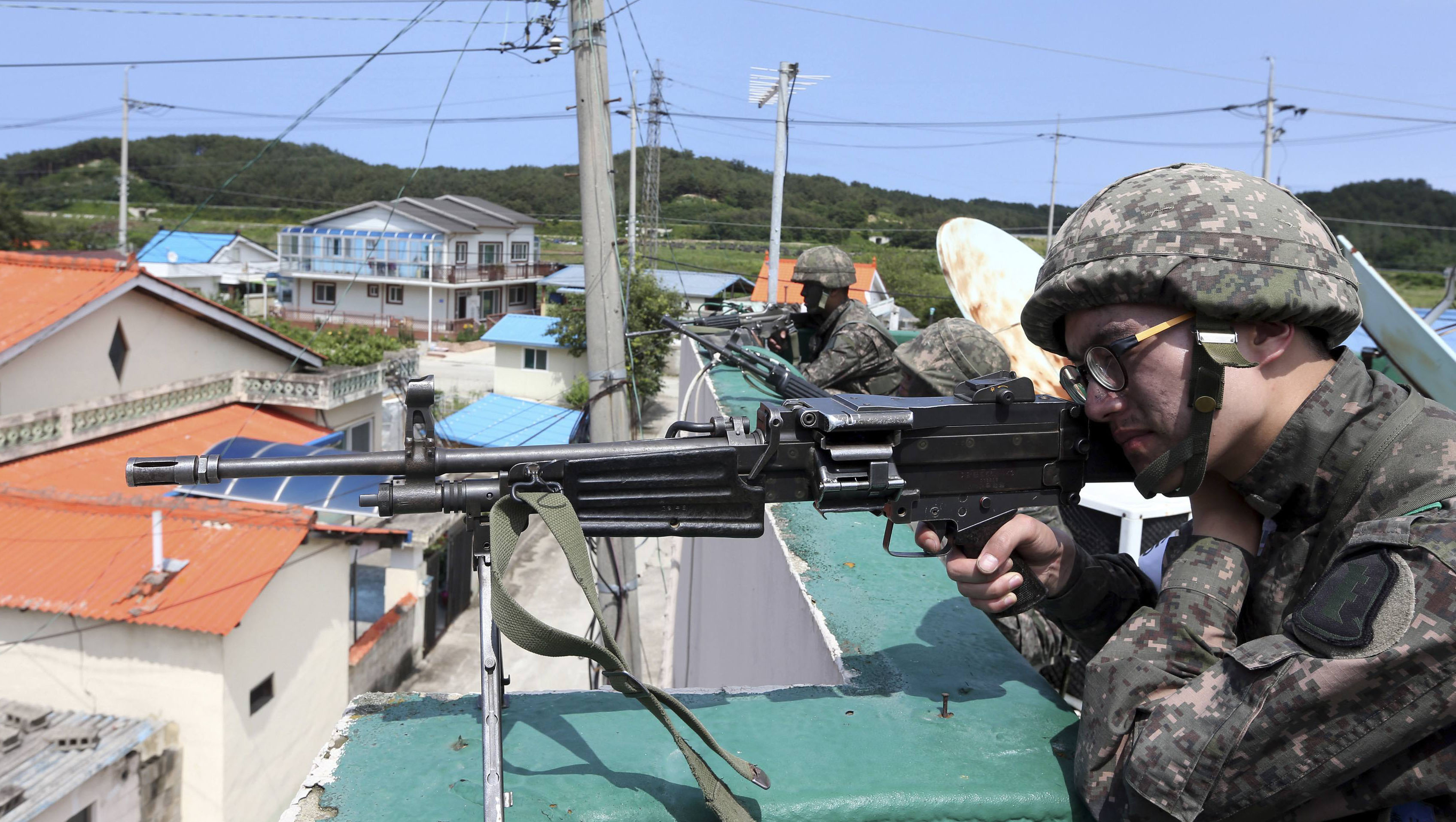 SEOUL, South Korea - A day after a tense shootout, troops on Monday tightened a cordon around a runaway South Korean soldier who killed five comrades at an outpost near the border with North Korea.

Yonhap news agency reported that the sergeant, identified only by his surname Yim, had been captured, but an official at Seoul's Defense Ministry said troops were still trying to persuade Yim to surrender, without elaborating.

Yonhap later corrected its report to say that he had not been captured.

Yim's parents were brought to the forest about 6 miles from the border outpost to talk to him, according to the Defense Ministry official who asked not to be named, citing department rules.

One platoon leader was wounded when Yim fired Sunday on the military personnel closing in on him, the official said. Troops fired back. Villagers in the area were warned not to leave their houses. The head of a nearby village, Jang Seok-kwon, said that he heard gunshots ring out about 10 times Sunday.

Yim threw a grenade and then opened fire Saturday night with his standard issue K2 assault rifle at the outpost near the North Korean border in Gangwon province, east of Seoul, killing five fellow soldiers and wounding seven others, the military said.

Yim, who was scheduled to be discharged from the military in September, fled with his weapon, but it wasn't clear how much ammunition he had.

A Defense Ministry official confirmed Yim was considered a "protected and watched soldier," which means he needed special attention among servicemen. According to the official, the South Korean military assigns such status based on servicemen's periodical personality tests.

Yim was designated a grade A protected soldier in April last year - one with a high risk of suicide attempt or inducing other accidents who could not serve at heavily guarded outposts. He then improved to grade B status last November, which means he was being watched closely but could serve at outposts at a commander's discretion.

The Korea Times, in an editorial Monday, said an initial probe into Yim's attack by a 48-member army investigation team exposed problems on the front line.

"Due to a shortage of troops, even some soldiers on the list of special attention had to be on border guard, which requires soldiers to be heavily armed. Needless to say, the military needs to come up with remedial measures to this problem," the editorial said.

Hundreds of thousands of troops from the rival Koreas are squared off along the world's most heavily armed border.

There was no indication that North Korea was involved. But tensions between the countries have been high recently, with North Korea staging a series of missile and artillery drills and threatening South Korea's leader. The Koreas have also traded fire along their disputed maritime border in the Yellow Sea. South Korea has repeatedly vowed to respond with strength if provoked by the North.

Shootings happen occasionally at the border.

In 2011, a 19-year-old marine corporal went on a shooting rampage at a Gwanghwa Island base, just south of the maritime border with North Korea. Military investigators later said that corporal was angry about being shunned and slighted and showed signs of mental illness before the shooting.

In 2005, a soldier tossed a hand grenade and opened fire at a front-line army unit in a rampage that killed eight colleagues and injured several others. Pfc. Kim Dong-min told investigators he was enraged at superiors who verbally abused him.

All able-bodied South Korean men must serve about two years in the military under a conscription system aimed at countering aggression from North Korea.

The Korean Peninsula is still technically in a state of war as the 1950-53 Korean War ended with an armistice, not a peace treaty. About 28,500 U.S. soldiers are stationed in South Korea as a deterrent against North Korean aggression.