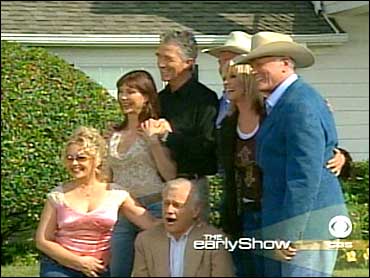 Fans of "Dallas" probably were better off not knowing this, but those conniving characters they loved to watch on TV actually were carrying on like the Marx Brothers when the cameras weren't rolling.

Just a taste of it was exhibited on The Early Show Friday when Larry Hagman (J.R. Ewing) and Patrick Duffy (Bobby Ewing) dropped by to be interviewed by co-anchor Rene Syler, who ended up playing the role of a younger and prettier Margaret Dumont. (Off camera, Duffy was imitating her throughout the interview.)

It was all for a good promotional cause, though, as Hagman and Duffy were there to make sure viewers know about the "Dallas Reunion: The Return to Southfork," which airs on CBS Sunday, Nov. 7, at 9 p.m., ET/PT.

It's been 25 years since the heyday of "Dallas," and Syler told the two stars that they looked "fantastic, seeing you here in the flesh."

They agreed that they had a wonderful time, filming the reunion on location at the original Southfork ranch, with the original core cast, saying it was like going back in time, adding, "And I looked in the mirror -- and time was not going backwards!"

During the days when they were shooting the series, Duffy says, the feeling of family among the cast was very real.

"Larry was the ringleader who started the family feeling in the cast from the very first day of the reading," he explains. "It was sort of like, 'follow the Pied Piper.'"

Continued Duffy, "Follow the corks! But it was that kind of thing. We'd all gather after every shot in Larry's little converted bread van and have this best time and it never ended for 13 years."

No one has ever been able to re-create the success of "Dallas," and Syler wanted to know if Hagman had any idea why that is so.

Even Duffy's character, which could have been too bland because of his goodness, was made interesting because of his interactions with villains like the one played by Hagman. And their experience off camera was just as interesting. In his very first scene with Hagman, Duffy says, his character (Bobby) confronted Hagman's character (J.R.) in a very dramatic showdown.

And during Duffy's close-up, Hagman let a rivulet of drool spill down his chin. Hagman demonstrated how it looked during The Early Show interview.

Quipped Hagman, "You don't think I'd do it during my close-up, do you?"

In 1978, America began its love affair with the prime-time drama "Dallas." From back-door business deals to illicit love affairs of the rich and corrupt, "Dallas" became "appointment television" for millions in the United States and abroad.

Syler chatted with cast members during the special's taping.

"I'm having a great time," Principal told Syler on the reunion's set. "I arrived, got off the plane, got in the car and started riding to Dallas. And suddenly, I saw the skyline, and buildings, and streets, and trees, and homes I hadn't seen in 18 years. ,,,I was in tears by the time I got to the hotel."

Despite what wound up being the show's historic success at the time, very few expected "Dallas" to last beyond its mini-series debut.

Duffy was among those taken by surprise when the show took off. "When you're old, you look back and your mind plays tricks at how smart you think you were," he told Syler, "I remember all of us at the end of the mini-series just saying, 'This was great. It was so much fun. You been talking to your agent, anybody got a job?' We were all making plans."

More than 350 episodes later, the cast gathered again and reminisced about the show's most memoriable moments.

"Dallas" ushered in the cliffhanger, Syler points out.

"The words, 'Who shot J.R.' probably changed your life in ways you can't even imagine," Syler exclalimed to Hagman.

"'Who shot J.R.' was the nicest moment of my life," Hagman responded. "That's when I decided to make my move and ask for a little more money. I thought at the time, 'I'm not going to get another chance like this. I'm really famous, now so let's become rich and famous.'"

Secrets and suspense-filled cliffhangers were what made "Dallas" hugely popular, Syler says. But the show also introduced social topics never before discussed in prime time.

"One of my favorite story lines," Tilton revealed to Syler, "was when Lucy was engaged to marry a young man who was from another very, very wealthy Texas oil family — and he was gay. That was 25 years ago, and that was well before 'Will and Grace' or anything."

Linda Gray has fond memories of her years playing Sue Ellen, such as the season when Sue Ellen was drunk much of the time. "I loved it … because I love to act. When you have boring things to do, it's like, 'Can I go home?' It was horrible."

She told Syler she and Hagman had instant chemistry.