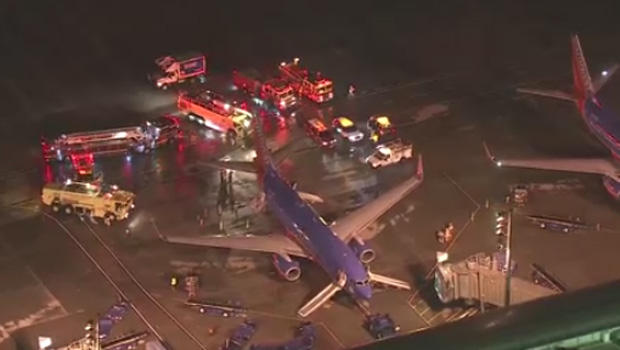 SANTA ANA, Calif. -- A fire on a Southwest Airlines plane forced it to be evacuated just before takeoff at a Southern California airport Monday night. Officials from John Wayne Airport say the crew of the Boeing 737 decided the plane should be evacuated using the aircraft's front emergency slides just after the plane had pushed back from the gate.

There were 139 passengers and five crew members on board, the Federal Aviation Administration says.

CBS Los Angeles reports smoke was detected in the cabin and some people suffered minor injuries as they went down the slides.

FAA spokesman Allen Kenitzer says the blaze was in the airliner's auxiliary power unit and was extinguished with the plane's fire suppression system. The auxiliary power unit provides power to start the aircraft's main engines and serves as backup power in some situations.

It forced a partial shutdown of the airport's taxiway, but airport operations later returned to normal.