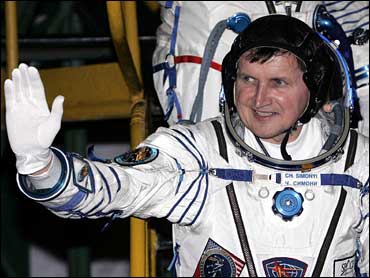 A Russian-built Soyuz capsule carrying the American billionaire who helped develop Microsoft Word docked at the international space station late Monday — to the earthbound applause of Martha Stewart and others at Mission Control.

The lifestyle guru was among Russian and American officials and visitors monitoring the docking at Russian Mission Control, on Moscow's outskirts, as onboard TV cameras showed the Soyuz nearing the station and then jerking to a stop. Stewart is a friend of Charles Simonyi, the American who shelled out $20 million to $25 million to be the world's fifth paying private space traveler.

Once the capsule — which also carried two cosmonauts — is secured to the station, it will take roughly two hours before the Soyuz crew are able to open the air locks and greet the station's current inhabitants in person.

The arrival of a new crew is always a happy event, and this time the residents are getting an extra treat — the gourmet dinner brought by Simonyi.

The menu, including quail marinated in wine, was selected by Stewart, who was also on hand for the rocket's launch Saturday.

Simonyi returns to Earth on April 20, along with Russian Mikhail Tyurin and the American astronaut Miguel Lopez-Alegria, who have been on the station since September. The other U.S. astronaut, Sunita Williams, will remain on board with cosmonauts Fyodor Yurchikhin and Oleg Kotov.

The dinner is to be eaten on Thursday, which Russia marks as Cosmonauts' Day, the anniversary of Yuri Gagarin making the first manned space flight in 1961.

Simonyi, 58, was born in Hungary but now lives in the United States, where he amassed a fortune through his work with computer software, including helping to develop Microsoft Word and Microsoft Excel.

Simonyi was bringing with him a sample of the paper computer tapes that he used decades ago when he first learned programming on a bulky Soviet machine called Ural-2.

While at the space station, Simonyi will be conducting a number of experiments, including measuring radiation levels and studying biological organisms inside the lab.