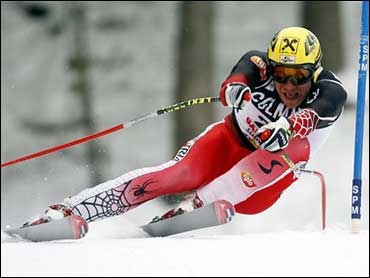 It looks like a submarine, but the X-38 is an example of cutting-edge technology.

The X-38 is a space lifeboat, a NASA test vehicle designed to be the best friend of an astronaut in trouble, reports CBS News Correspondent Manuel Gallegus.

"A crew return vehicle is designed as a life boat and ambulance to get astronauts back from the International Space Station in the case of where the station had to be evacuated or an astronaut got very ill," explains engineer Chris Nagy.

The craft will dock on the space station. It can carry six passengers and it flies itself, basically gliding back to Earth. Its trip down can take as little as a couple of hours, depending on where the X-38 is directed to land.

Despite economic instability in Russia, the International Space Station is scheduled for completion by 2004.

"NASA, the Russian Space Agency, the European Space Agency, Japan, and other international partners met in early October and formally committed to launching the first component in November. This is a Russian module," says CBS News Space Consultant Bill Harwood.

The rescue vehicle is set to take its first test voyage into space in November of 2000, in the belly of one of the space shuttles.