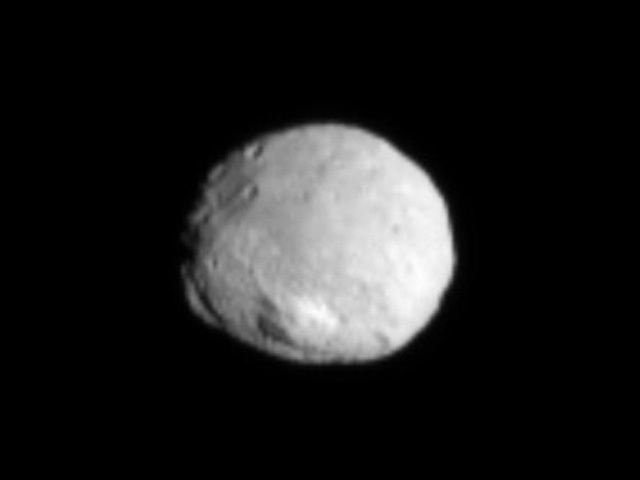 LOS ANGELES - After four years sailing through space, the Dawn spacecraft was expected to slip into orbit late Friday around a giant asteroid to begin a yearlong investigation into the origins of the solar system.

It is the first of two scheduled tour stops for the NASA probe that almost never made it to the launch pad.

Dawn will spend the next several weeks spiraling ever closer to the surface of Vesta, a dry and rocky asteroid about the length of Arizona that's thought to be the source of numerous meteorites found on Earth.

Scientists are eagerly awaiting the first close-up shots of Vesta, expected next month. Until now, it has only been photographed from afar.

Residing in a vast field of rubble between Mars and Jupiter, asteroids are like the Peter Pans of the solar system that never quite grew into full-fledged planets. That they remain frozen in time is a boon for researchers attempting to reconstruct how Earth and the other planets formed.

Because of its stunted growth, Vesta holds "a record of the earliest history of the solar system," said the mission's lead scientist Christopher Russell of the University of California, Los Angeles.

After spending a year at Vesta, Dawn will cruise on to an even bigger asteroid, Ceres.

Vesta and Ceres are not your garden-variety asteroids; if the asteroid belt were a boxing ring, they would be the heavyweights in a sea of lightweights.

Past spacecraft have zipped by, circled around and even landed on much smaller asteroids. Dawn will be the first to orbit two asteroids on the same mission, a feat that is possible because of Dawn's futuristic ion propulsion engines, which allow for gentle yet constant acceleration. Once the stuff of science fiction, ion propulsion, which has been tested in space over the years, is far more efficient than conventional rocket fuel used by the majority of spacecraft.

Circling an extraterrestrial body is usually a risky, nail-biting business. A speeding spacecraft often has to fire its engines to slow down and be captured into orbit. One wrong move and it can overshoot its target.

In Dawn's case, it journeyed slowly on purpose so that it could line up with Vesta's path around the sun. Dawn was approaching the asteroid at 60 mph, slower than the speed limit on most U.S. highways, and engineers expected it to enter orbit around 10 p.m. PDT Friday.

Because Dawn's antenna was pointed away from Earth, actual confirmation of the capture would not be possible until after the weekend when it's programmed to re-establish contact.

If a cosmic ray or other unforeseen occurrence interrupts Dawn's flight, engineers said they can still get it back on track.

"We never get very far off the normal course" because Dawn is constantly thrusting, said chief engineer Marc Rayman of the NASA Jet Propulsion Laboratory, which manages the $466 million (â‚¬328.12 million) mission.

Dawn racked up 1.7 billion miles traveling to Vesta and will be about 10,000 miles from the surface at the time of orbit insertion. By the time it reaches Ceres - the largest object in the asteroid belt - in 2015, it would have logged 3 billion miles. With the space shuttle program winding down, NASA wants to send astronauts outside Earth's orbit to an asteroid and eventually Mars. Robotic spacecraft such as Dawn should help future manned missions.

The spacecraft will begin surveying Vesta next month from 1,700 miles high and will get as close as 110 miles above the surface. Besides a camera, it carries a spectrometer to map minerals, and a gamma ray and neutron detector to measure the chemical composition of the surface.

Of particular interest is a massive crater in the South Pole caused by an ancient collision that hurled chunks of debris into space. Some fragments fell to Earth as meteorites. It's estimated that 1 out of every 20 meteorites found on our planet came from Vesta.

"Vesta isn't just another chip of rock. It's a big place," Rayman said.

The journey to the launch pad was filled with drama. The project was put on hold in late 2005 after problems during development pushed it over budget. NASA killed the mission in early 2006 only to do an about-face after JPL challenged the decision.

Dawn finally blasted off from Cape Canaveral, Fla., in 2007 and is the largest interplanetary probe launched by NASA. With its solar panels unfurled, it measures 64 feet tip to tip.