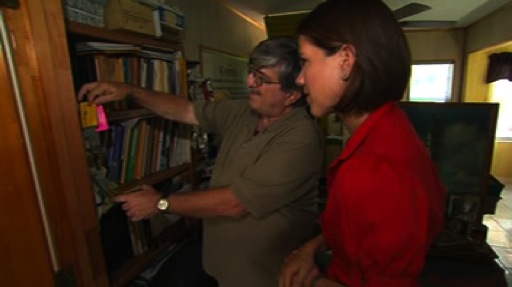 When space shuttle Atlantis touches down at Cape Canaveral for its final landing, Ken Havekotte will be watching. Nearly a million people showed up to watch Atlantis launch and a thinner crowd will be on hand to watch its scheduled landing Thursday morning -- but very few people can boast a richer personal history with manned space flight from Kennedy Space Center than Havekotte.

That's because the Merritt Island resident has only missed one launch since he saw his first unmanned Delta rocket launch with his family one day in September. September of 1968, that is.

"I remember, it was a night launch," Havekotte told CBS News correspondent Kelly Cobiella. "We sat along the riverside there and we had liftoff. The rocket turned night into day. As a young boy it just really overwhelmed me."

In that moment, Havekotte was captivated. He'd always dreamed of being close to the space program, so when his father's work took him to the Space Coast in the late 1960s, Havekotte made the most of his front-row seat to history. He began going to all the launches, and marveled that his classmates weren't as fascinated by space travel as he was.

"I was kind of surprised that a lot of the kids weren't into that. 'You've seen one launch you've seen them all...' But for me it was different. I just had this thrill from that," Havekotte told CBS News.

Then, the United States did the impossible : NASA scientists put men on the moon.

"To have mankind go onto a 400-ft. rocket and just be on the pinnacle of that rocket with three men strapped down and going beyond the Earth's gravity more than 200,000 miles to the moon was just incredible," he said.

So incredible, in fact, Havekotte began pursuing a career in space. Even if he couldn't get in the cockpit.

"I couldn't do it, I didn't have the right stuff," Havekotte said, but continued, "If I can't fly in space I want to be as close as I can."

As a super fan?

"As a big, big fan. You bet," Havekotte laughingly replied.

A big fan who has witnessed more than 300 launches. He was there for all 11 manned Apollo flights, countless launches of unmanned satellite and military missiles and 134 of the 135 launches of the shuttle program.

He even turned his hobby as a space enthusiast into a lucrative career as a vendor of space-related memorabilia. As the owner of SpaceCoast Cover Service, Havekotte collects and sells everything from mission-specific patches and stickers, to pieces of a heat shield from one of the Gemini flights in the mid-1960s to a full spacesuit used in research applications for the shuttle program in the 1980s.

It's been a labor of love, and though prices for his collectibles have temporarily lifted off in advance of the shuttle program coming to a close, Havekotte has questions about where his hobby goes from here.

"I look forward to the future, but we're at a crossroads right now," Havekotte admitted.

Though there's nothing currently on the table to replace the three-decades-old space shuttle program, Havekotte is hopeful that American astronauts will be riding rockets made in the USA in the not too-distant future. He'd like to see the next mission aim for Mars and beyond. But in the meantime, he's mourning the end of an era -- and an obsession.

"I have never lost my passion and my excitement," Havekotte said. "You spend 35 years of your life working and breathing and living the programs. There's going to be an impact. It's like losing your child in some ways."