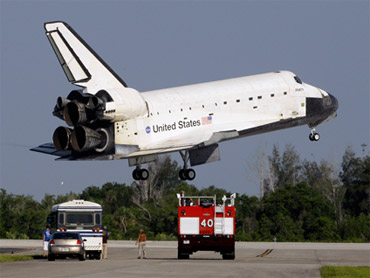 Space shuttle Atlantis returned from orbit for the last time Wednesday, closing out a 25-year flying career and safely bringing back six astronauts who boosted the International Space Station's power and size.

"That was pretty sweet," Mission Control radioed after Atlantis glided through a clear morning sky and rolled down the runway. "That was a suiting end to an incredible mission."

Commander Kenneth Ham said he was ready to turn the shuttle over to the ground teams and get Atlantis "back in the barn for a little bit."

Mission Control had monitored storms throughout the early hours, but they dissipated by daybreak and remained at a safe distance. The cockpit erupted in cheers when Mission Control finally radioed up the "go" to come home.

About 1,200 guests lined the Kennedy Space Center runway to welcome Atlantis and its crew home, the maximum allowable crowd. The lead flight directors for the space station construction mission came in from Houston for the event. Space center employees wore white ribbons with the name "At,`ntis" and its picture embossed in gold.

"The legacy of Atlantis now in the history books," Mission Control's commentator announced at touchdown.

This was Atlantis' 32nd journey; the shuttle logged its 120-millionth mile shortly after midnight.

Discovery is up next, scheduled for launch in September or October, followed by Endeavour late this year or early next on what is currently planned as the shuttle program's final mission.

While Atlantis is not scheduled to fly again, it will be processed for launch on a possible rescue mission if Endeavour experiences a major problem that might prevent a safe re-entry.

NASA managers are holding out hope the Obama administration will approve a final flight for Atlantis to take advantage of an external tank and booster set that otherwise would go to waste, Harwood reports.

The astronauts accomplished everything they set out to do after rocketing into orbit May 14, and did it with some humor. When Comedy Central's Stephen Colbert called to chat Tuesday, the one-liners zipped back and forth.

"We've got a new antenna on the space station, a new six-pack of batteries, a new module docked to the station, and generally have defeated the forces of evil, so we're very happy about how things have gone," said spaceman Garrett Reisman.

Ham and his crew turned serious, though, when reflecting on Atlantis' quarter-century of service and the impending end of the space shuttle program.

Atlantis - the fourth in NASA's shuttle series - is ending its run after having spent an accumulated 294 days in orbit and circled Earth 4,648 times. It's carried 189 astronauts and visited the International Space Station 11 times. It also flew seven times to Russia's old Mir station and once to the Hubble Space Telescope.

The shuttle added another 4.8 million miles this time around, for a grand total of 120,650,907 miles over its lifetime.

The space station crew managed to catch a glimpse of the re-entering shuttle. "Most impressive," observed astronaut Timothy Creamer.

As a tribute to their ship, the astronauts flew a small U.S. flag that accompanied Atlantis into orbit on its maiden voyage in 1985, as well as a couple tool bins full of shuttle mementos.

Sir Isaac Newton even got in on the act, albeit posthumously. British-born astronaut Piers Sellers flew a wood chip from the actual tree from which an apple fell nearly 350 years ago and inspired Newton to discover the law of gravity.

Once Atlantis is back in the hangar, it will be prepped for a potential rescue mission for what's currently slated to be the final shuttle flight by Endeavour. Endeavour's trip is targeted for November, but NASA managers will reassess the date in another week or two.

The only other flight on the books is a supply run to the space station by Discovery in September. That date also is being evaluated.

Both of those missions have payload issues that are threatening to cause delays.

NASA would like to fly Atlantis again in June 2011, provided no rescue mission is needed for Endeavour's flight. It would be one last supply run with a four-person crew that could camp out at the space station in the event of serious shuttle damage and return to Earth in Russian Soyuz capsules.

Atlantis' ultimate destination will be a museum somewhere in America.

The space station - 98 percent complete now in terms of living space - will lose half of its six-person crew in another week. Three astronauts will return to Kazakhstan aboard a Soyuz on June 2, and their replacements will fly up two weeks after that.

Americans will keep hitching rides on Russian rockets until U.S. private enterprise is able to take over. That's one of the goals set forth earlier this year by President Barack Obama, who wants astronauts aiming for asteroids and Mars in the next few decades.