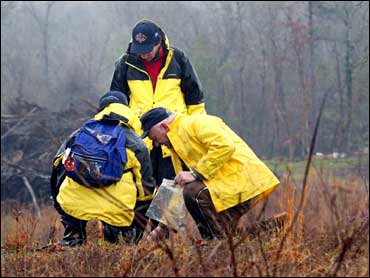 A law enforcement officer accused of pilfering debris from space shuttle Columbia has been charged with stealing government property.

A grand jury on Tuesday indicted Robert Hagan II, 45, on a charge that he stole a shuttle tile.

In Beaumont, another federal grand jury indicted Jeffrey Arriola, 35, a sheriff's deputy, on Wednesday of charges he kept shuttle debris.

Arriola resigned after investigators confronted him with the accusation, officials said. If convicted, Arriola faces up to 15 years in prison and fines up to $500,000.

Hagan, a Harrison County constable, showed shuttle debris to a sheriff's deputy and told him he was allowed to keep the items, according to records.

Once the deputy heard of the other looting arrests, he told his superiors about Hagan, a court affidavit states.

Hagan remained free on bond and had not appeared in federal court to enter a plea on the charge. If convicted, he could face up to 10 years in prison and a $250,000 fine.

In Texas, constables are primarily responsible for serving court papers and working as courtroom bailiffs, though they sometimes write tickets, patrol or do other police work. They are elected to four-year terms.